Too Busy Frontrunning Inflation, Nobody Sees The Deflationary Tsunami

Those looking up from their “free fish!” frolicking will see the tsunami too late to save themselves. 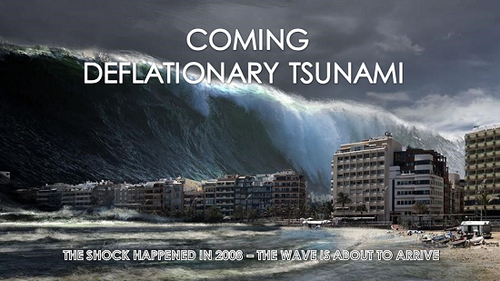 It’s an amazing sight to see the water recede from the bay, and watch the crowd frolic in the shallows, scooping up the flopping fish. In this case, the crowd doing the “so easy to catch, why not grab as much as we can?” scooping is frontrunning inflation, the universally expected result of the Great Reflation Trade.

You know the Great Reflation Trade: the world has saved up trillions, governments are spending trillions, it’s going to be the greatest boom since the stone masons partied at the Great Pyramid in Giza. It’s so obvious that everyone has jumped in the water to scoop up all the free fish (i.e. stock market gains). Only an idiot would hesitate to frontrun the Great Reflation’s guaranteed inflation.

Unless, of course, what we really have is a tale of reflation, told by an idiot, full of sound and fury, signifying nothing. Everyone frolicking in the shallows scooping up the obvious, easy, guaranteed gains is so busy frontrunning inflation that nobody sees the tsunami rushing in to extinguish the short-sighted frolickers. ( When Does This Travesty of a Mockery of a Sham Finally Implode? 3/3/21) 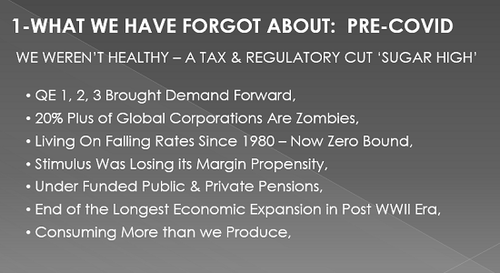 Funny things happen when we substitute debt for earnings and speculation for productive investment. That’s what America has done for the past two decades: as wages stagnated for the bottom 95%, we’ve inflated speculative bubbles in everything to generate the illusion that we have “wealth” that we can borrow against, and then use all that “free money” (free fish!) to consume and speculate in all the shallow safe waters created by interest rates falling decade after decade, making it ever cheaper to borrow, buy and blow speculative bubbles.

Here’s an example of the dynamics near-zero yields and interest rates have unleashed: in the frenzy of ever-lower rates, one crazed frolicker buys a $200,000 house for $500,000. Suddenly every homeowner in the neighborhood has $300,000 in “free money” to borrow and blow– free fish! It would be crazy not to scoop some of that “free money,” so homeowners refinance at low rates and extract the “free money” created by the speculative bubble powered by declining rates.

So what if your earnings buy less every year–there’s “free money” galore–you just have to borrow it. And never mind value–what’s value other than what some frolicker will pay?

What new utility or productivity was created when the $200,000 house was revalued at $500,000? None. How about the commercial building that went from $2 million to $5 million? None. Or the stock with phantom fantasies instead of actual profits that went from $2 to $20?

A few problems arise from all this frolicking with the “free money” created by declining rates and speculative manias. One is that rates/yields have hit zero and are starting to rise. It’s fun to imagine rates sliding into negative territory, but banks can’t really afford to pay us $1,000 a month to borrow money from them. I know it’s hard to imagine, but the banks need us to pay them interest and principal.

That interest and principal piles up, even at near-zero rates. Combine stagnating wages that buy fewer goods and services every year with ever-higher debt loads and monthly payments, and then add in higher taxes, and presto, we end up with insolvent households and enterprises that must borrow more to stay afloat. If they can’t borrow more, they default.

Those that can’t borrow more can’t spend, and that’s a problem because the entire economy depends on everyone borrowing and spending more every year. i.e. “growth.” 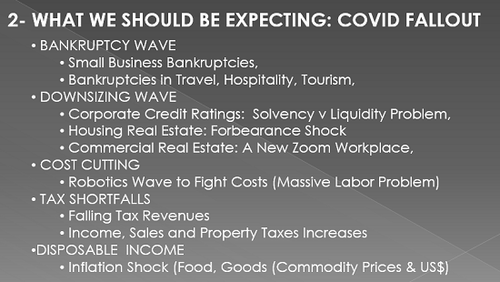 Just as new loans create money, defaults send money to money heaven. When loans are paid off or written off due to default, the money supply shrinks. That is deflationary.

It was fun to frolic in the fantasy that we could borrow our way to prosperity on the phantom collateral of speculative bubbles, but that’s not sustainable. The wealth conjured by zero rates inflating speculative bubbles is illusory. Real wealth requires sustained increases in productivity that are widely distributed to wage earners. Anything other than that is illusion destined for a messy, shattering destruction. 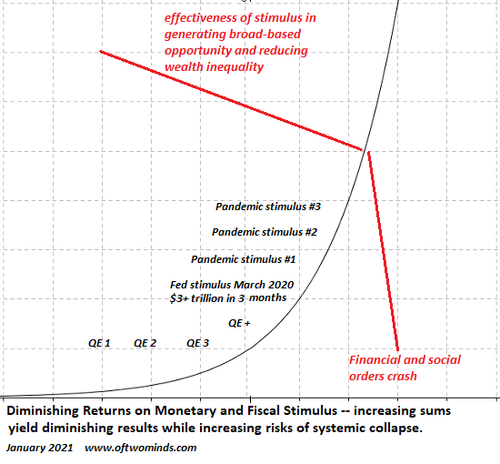 Speculative bubbles pop. All phantom wealth vanishes back into the air it emerged from. Insolvent borrowers counting on ever lower rates of interest and ever higher valuations default. Lenders who leveraged up to loan gobs of “free money” to uncreditworthy borrowers will be destroyed by the monumental write-offs of uncollectible debts based on phantom valuations. 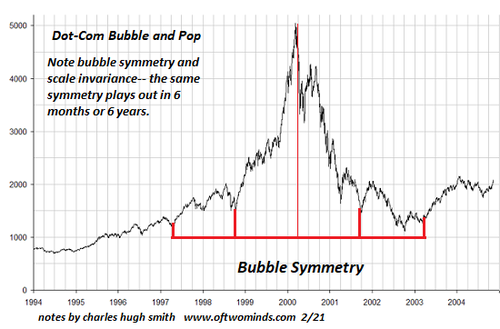 Those looking up from their “free fish!” frolicking will see the tsunami too late to save themselves. None of the frolickers will be able to outrun the tsunami or avoid being crushed as it sweeps all the debris of a speculative mania into the flooded ruins beyond the shoreline.

There’s much more in our 53-minute presentation, The Coming Deflationary Tsunami: