For those wondering, we are at that point in the bubble where Wall Street professionals are actively urging investors to buy everything they have to sell.

Take Bob Michele – the chief investment officer at JPMorgan Asset Management which manages $2.3 trillion – who had some bad news for everyone sounding alarms on asset bubbles: there’s much more credit euphoria to come. Speaking to Bloomberg, Michele said he was betting on an ever-more intensifying rally across junk bonds, emerging market debt and risky bank securities.

Why? Because “stimmy” checks of course, or as he put it, fresh stimulus beckons.

In his euphoric vision of the coming uber-bubble, Michele says average U.S. junk-bond spreads are set to drop to 300 basis points, and over the course of the next year could test pre-financial crisis lows of 250 basis points. As a reminder, last week we showed that the average “high yield” (lol) bond now has an average yield of less than 4%! 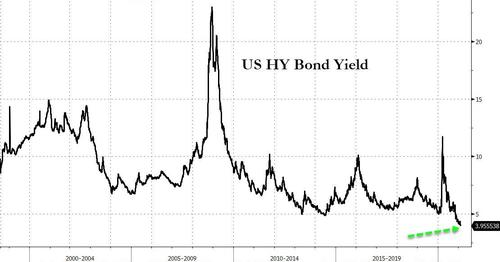 This, even as net leverage across the corporate sector has exploded to bananas levels. 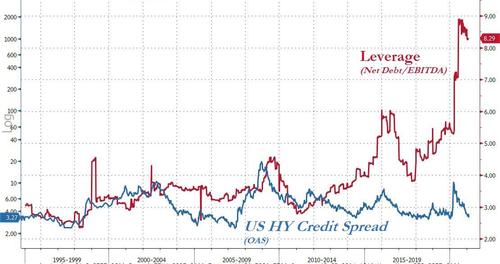 But instead of worrying about something as boring as valuations, Michele told clients to “ride the rally and drown out warnings that the market has become overheated.”

“Some want to wait until there is a meaningful correction. I keep telling them that everyone on the planet is waiting for that to happen,” Michele said in an interview. “Valuations occupy everyone’s time and effort. Nobody likes them here. But that’s the reality.”

Ironically, none other than Michele’s own firm JPMorgan warned late last week that with its models showing near record complacency, the highest since the dot com bubble… 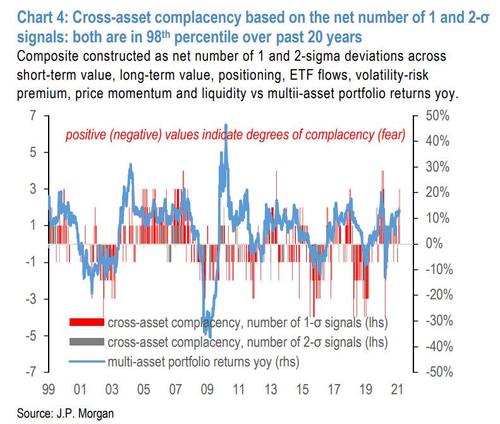 … a correction is imminent. But we are confident that Michele would say to ignore that and also ignore a bizarre warning from none other than the IMF last week warned that risk assets were over-valued with no cushion built in for negative surprises (and yet, the same IMF urges massive fiscal stimulus as if it doesn’t realize that most of this new money goes into markets).

None of this matters however to Michele, who correctly points out that with global central banks plowing trillions into market and fiscal stimulus stoking economic recoveries, there’s no reason to pull back now.

Michele jumped into the reflation trade early – which is a more politically correct name for “dash for trash” – pivoting into corporate bonds and emerging markets debt pegged to growth last year. Needless to say, this trade has done very well in recent months: Michele’s Global Opportunities Fund has outperformed 85% of peers in the past year, according to Bloomberg data.

Among his other observations in the interview:

So when will the party end? According to Michele, the next Fed hike will take place in 2023, when a pick-up in inflation and growth puts central banks back on the tightening path. Until then, relentless stimulus, which he dubbed “Modern Monetary Theory on steroids” (because deranged helicopter money was taken?) has set up a perfect backdrop for risk assets.

“The reflation trade still has a lot of room to go,” he said. “Central banks are printing more money every day and that money finds its way into the market. This is not going to stop anytime soon.”

Translation: it’s a bubble, and no central bank will ever again dare to pop it, so may as well go all in.

Looking for Monsters To Slay