Traders Are Bracing For Another Hectic Session

By Michael Msika, market commentator and analyst for Bloomberg Markets

Just when Europe’s equity benchmark was about to hit a record high, clouds are forming over the stock market again, with a wave of U.S. block trades rattling investors worldwide. But at least one alluring factor remains intact: the region’s stocks are still cheap, especially in a world of rising bond yields.

Traders were bracing for a hectic morning after Credit Suisse Group AG joined Nomura in warning about potential significant losses related to an unnamed U.S. hedge fund client defaulting on margin calls. Meanwhile, Morgan Stanley was shopping a large block of ViacomCBS Inc. shares, according to people familiar with the matter, a sign that the unwinding may not be over.

Shares in Nomura tumbled 16%, most on record, while Credit Suisse shares were indicated down 7% ahead of the open. Still, Euro Stoxx 50 futures were edging higher while U.S. index futures slipped.

Despite the Stoxx 600’s strong outperformance since the end of October, the benchmark has been getting cheaper. The gauge’s forward P/E has dropped since a record high last June, as a surge in earnings forecasts has outpaced the stock gains. That’s kept valuations lower than global peers. 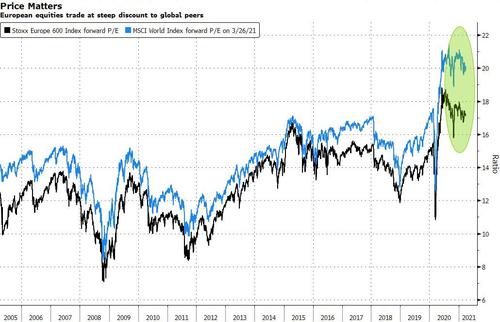 Europe’s stock rally has wobbled in recent weeks, with the Stoxx 600 struggling to recapture a record high that’s tantalizingly close as rising virus cases and vaccine hurdles cast doubts about reopenings. Still, a sharp improvement in vaccine supply in the next two quarters should be enough to inoculate the bloc’s population, which should accelerate economic momentum, according to Bank of America.

“Equity returns should slow, but Europe can outperform as relative macro data improves,” say Morgan Stanley strategists including Graham Secker, who see the continent’s relative economic momentum improving in the next three to six months. Europe is likely to be the only region with stronger GDP growth in 2022 than 2021, and should remain a relative beneficiary of higher bond yields, they say. 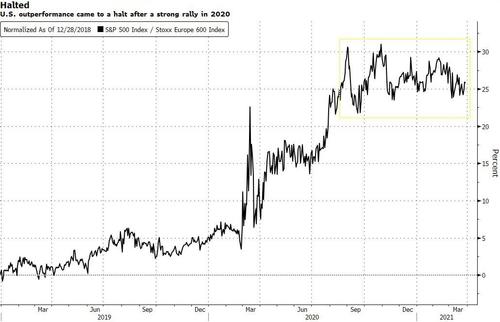 While the “easy money has been made” on European stocks after a 33% rally over the past year, there’s still double-digit upside left to banks, insurance, energy, Italian and U.K. equities, says Secker, part of a chorus of bullish call on value.

Such shares are not only lagging cyclicals, signaling more room for a rally, but are positively correlated to bond yields and inflation expectations. European stocks, with a heavy exposure to the cheap stocks, in fact trade at similar P/E levels to U.S. value shares. 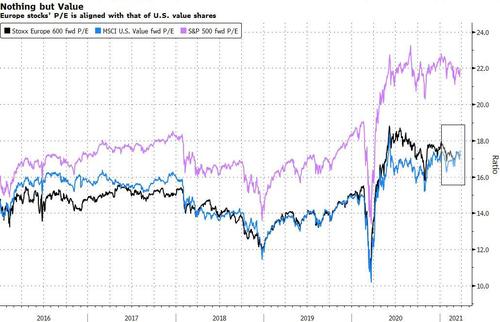 “This alignment of positive top down macro conditions and bottom up fundamental views is a powerful narrative for value and for further upside from here, despite the already large rotation we have already seen,” says Bernstein strategist Sarah McCarthy, who is overweight on value shares. While European profit forecasts have risen faster than the U.S. in the past two quarters, McCarthy sees more upgrades in store for sectors such as banks, energy and autos. 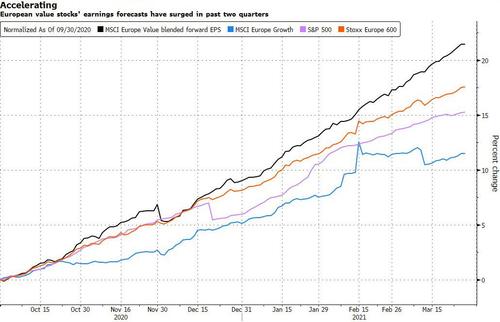 If valuation is the key attraction, U.K. equities too are due a catch up. Despite the lifting of the Brexit overhang and faster vaccine rollouts, they remain one of the cheapest developed markets. The MSCI U.K. gauge hit an all-time low against global peers last month and trades near a 30% discount, the most in at least 15 years.

Not everyone is optimistic though, and the row over vaccines and fresh virus-led restrictions this month show where things could go wrong with the long-awaited economic rebound. Looking beyond the immediate recovery, the prospect of higher taxes also dims the appeal of the value trade, according to Lewis Grant, senior global equities portfolio manager at Federated Hermes. 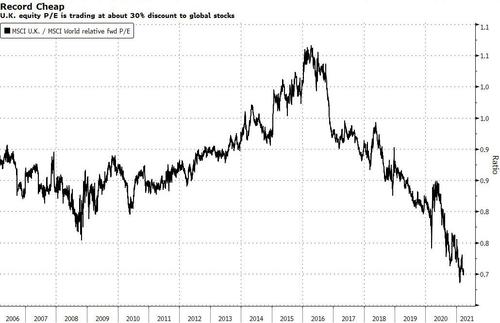 “The U.S. economic stimulus promised a lot for value, yet the optimism gave way to concerns about increased U.S. corporate tax rates that typically have a greater impact on value than growth stocks,” says Grant. The U.K. government was the first major country to announce a corporate tax hike from 2023, while the U.S. is also weighing higher levies.

Far More Men Than Women Drown In The UK