While traders are preoccupied by the accelerating meltdown in equities and especially tech stocks which just can’t catch a bid, the real action this morning was in the US Treasury market, where just after 10am ET, a burst of selling in Treasury ultra-long bond futures on massive volume sparked a mini flash crash.

According to Bloomberg’s Edward Bollingbroke, 10,000 of the June 2021 ultras contract were liquidated taking out all bids, and prompting more activity which eventually led to around 20,000 contracts trading over a 10-minute period. 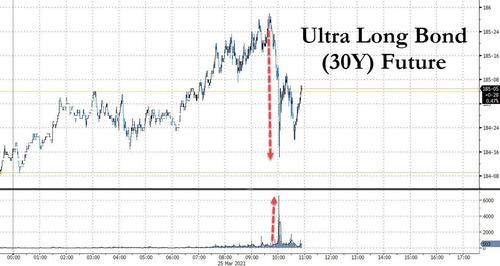 The impact of the mini flash-crash was seen in the cash Treasuries curve, with the 5s30s spread steepening almost 4 basis points into the move. 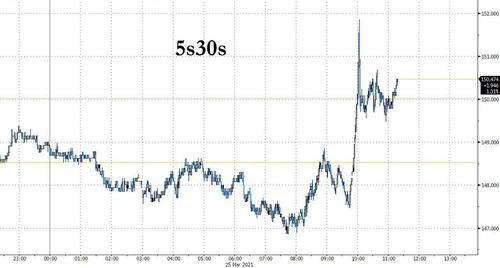 The liquidation puke was also the most activity in the contract since the month-end driven Feb. 26 close… which also followed last month’s catastrophic 7Y auction. Oh, and as a reminder, in less than 2 hours the Treasury will sell another batch of 7Y paper although the odds of another disaster are far lower today with yields across the curve far tamer and after this week’s 2Y and 5Y auctions which were well accepted (with a few glitches).

As Bollingbroke notes the flow could be related to month-end, or a hedge against some investment-grade corporate issuance. It could also be just a last minute dump by a major investor who wants to be flat ahead of what could potentially be a market-moving auction.