Trading Bonds In Venezuela? Bring A Gunman And Cash

The Venezuelan bond market – described by Bloomberg as one of the ‘tiniest and almost certainly the most primitive’ in the world – is also one of the most dangerous. 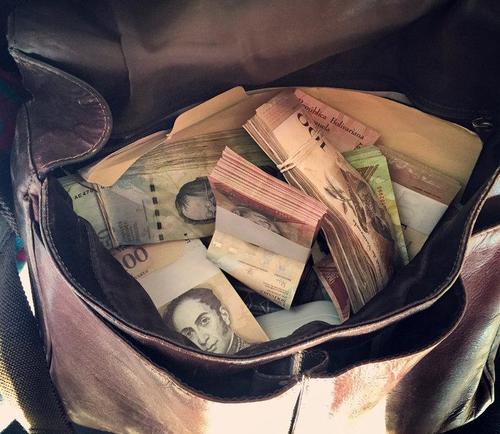 Based in Caracas where Nicolas Maduro’s socialist government is ‘ever so slowly freeing up the battered economy’ for capitalistic endeavors, the US dollar has become the defacto currency. Yet, there’s no electronic method to electronically transfer USD from one bank to another – which means having to get creative.

So when a local rum maker decided to become the first company to sell dollar bonds in the country in at least two decades, investors shoved stacks of hundred-dollar bills into bags and lugged them over to the distiller’s bank in eastern Caracas. All sorts of techniques were employed — everything from an armed-guard escort to an incognito approach — to navigate the streets of one of the world’s most dangerous cities. And while the deal was minuscule — totaling a mere $300,000 — and limited to just investors with local bank accounts, its success late last year has triggered a wave of interest from both companies seeking financing and wealthy Venezuelans looking to get a return on their cash. -Bloomberg

“What can a person who has dollars in Venezuela do with that money? Leave it the bank?” asked former Caracas Stock Exchange president, Juan Domingo Cordero, who retired two years ago as the president of brokerage Rendivalores. “The problem is clearing the operations. We can’t continue to operate in cash.”

Another distiller, Ron Santa Teresa SACA – whose 1976 Ron Antiguo de Solera sells for around USD $40 per bottle – is offering local dollar-bond sales of zero-coupon notes (structured that way so investors wouldn’t have to deal with the danger of picking up cash interest payments). The one-year bonds were sold at 96 cents on the dollar, with investors paid back 100 cents at maturity funded by proceeds from exports.

Until very recently, a dollar-bond sale would have been almost unimaginable. But thanks to years of economic policy (and of course, crippling sanctions) which have decimated capital markets and led to restrictions on foreign-currency transactions, Venezuela has embarked on ‘a reluctant embrace of private business and dolarization,’ according to the report.

And as Bloomberg notes – daring investors are now asking if now is the time to swoop in and buy distressed Venezuelan assets. Yet, change is slow in the country, which is still grappling with regular blackouts and a lack of fuel.

Hindered by strict monetary policies and a drought of government subsidies, banking credit in Venezuela is next to impossible to obtain for average companies. Outstanding loans in the county total less than $200 million – just 0.5% of GDP, according to Venezuelan researcher Ecoanalitica.

Unsurprisingly, the number of commercial-paper sales in bolivars soared 60% last year, though that amounts to just $60,000 per day – down from $5 million in the 1990s.

“We no longer have a subsidized economy or cheap loans,” according to Jose Miguel Farias, finance director at Caracas-based brokerage Mas Valor. “And credit is the fuel that keeps businesses open.”

Investors with dollars are ready to put their money to work. There is about $2 billion in cash circulating in the economy, and another $400 million is sitting in no-interest accounts at local banks. There’s no way for Venezuelans to transfer the money overseas. While Ron Santa Teresa’s bond spurred speculation that there would be an immediate wave of similar issuance, the ramp-up has been slower than expected.

Other companies seeking to raise funds have been thwarted by regulatory and structuring issues, according to three people familiar with the process who asked not to be identified discussing confidential information. Jose Maria Nogueroles, a former banker who opened the BNCI Casa de Bolsa brokerage last year, says his firm has sought regulators’ approval for three dollar-bond sales from local companies with no success so far. –Bloomberg

“We need to democratize the market and simplify the process,” said Nogueroles.

Until then, investors – such as those who purchased Ron Santa Teresa bonds in the hopes that a dollar-clearing system would be implemented by maturity – will need to hit the streets of Caracas to transport their matured investments in the form of physical banknotes – trying to avoid criminal gangs and one of the highest murder rates in the world in order to earn some interest.