Trump Is “Still The Future Of The Republican Party” Says Don Jr.

Donald Trump Jr. asserted that his father, former President Donald Trump, is still the future of the GOP ahead of his speech at the Conservative Political Action Conference (CPAC) this weekend. 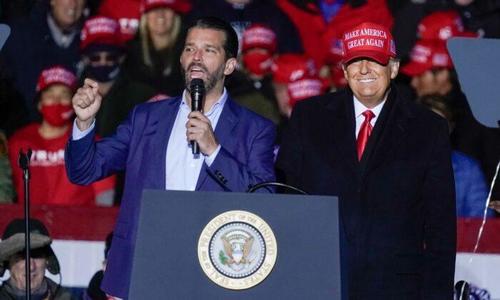 Trump Jr. is scheduled to speak at CPAC on Friday, while the former president will give a speech on Sunday.

The former commander-in-chief has not yet indicated whether he would run for president in 2024. Trump was impeached and later acquitted by the Senate earlier this month, triggering a schism between Republicans who either voted to impeach or convict and those who did not.

Since the Jan. 6 Capitol breach, a number of corporations severed ties with Republicans. The younger Trump argued that it may ultimately be a positive development because it shows the GOP represents working-class Americans, rather than Democrats—who have for decades attempted to cast themselves as the party representing the working class and unions.

“The Republican Party isn’t going to be bound to those corporate interests anymore,” he argued in the Fox interview. “So I love that they are making that link and breaking it, because we need more of that and we need candidates and people who will go to bat, who will go to war and fight for the American working class and make sure we put them first.

Trump added that it’s unprecedented in history for it to be considered “controversial” for “leaders of a nation to put their people first.” He added: “Why is it now, and how do the Democrats get away with making America last as opposed to first?”

A number of opinion polls in recent weeks suggest that Trump is still viewed highly by Republican voters, with one survey showing that up to 70 percent of Republicans would consider joining a Trump-backed political party.

Since the Jan. 6 incident, Trump was de-platformed by Big Tech firms, including Twitter—his once-favored social media platform—and has delivered messages to supporters and the media mainly via email. Should he run again for president, it’s not clear if he would attempt to join an alternative social media website and app like Parler or start his own.