Trump Lawyer: Impeachment Is “Political Weaponization” Of A Constitutional Process

David Schoen, one of former President Donald Trump’s newly appointed impeachment defense attorneys, said he believes that Democrats are using the impeachment process as a “weapon” to go after Trump in an attempt to bar him from running for office again.

“This is the political weaponization of the impeachment process,” Schoen told Fox News’ Sean Hannity on Monday.

“I think it’s also the most ill-advised legislative action that I’ve seen in my lifetime. It is tearing the country apart at a time when we don’t need anything like that.”

Democrat lawmakers have been calling for Trump’s impeachment since the beginning of his term, Schoen said, and the upcoming trial is their latest attempt to target him, as well as to carry out their agenda of preventing him from ever running for president again.

“That’s about as undemocratic as you can get,” Schoen said.

“Can you imagine the slap in the face that is to the 75 million or more voters?”

“Fair-minded people don’t support using the impeachment process to then try to bar someone from running for office again,” he added.

The Democrat-controlled House on Jan. 13 voted 232–197 to impeach Trump on a single article of impeachment, alleging that the president incited an “insurrection” that caused the U.S. Capitol breach on Jan. 6. 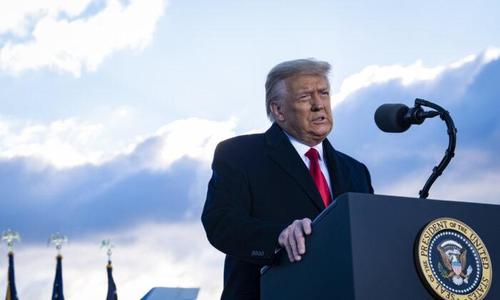 The impeachment, which was completed in a single seven-hour session, has been criticized by Republicans for its expediency and lack of due process. Meanwhile, the question of whether the Senate trial, which will begin on the week of Feb. 8, is constitutional has prompted a heated public debate among legal scholars and lawmakers.

Scholars who are arguing that the trial is unconstitutional are relying on an interpretation of Article II, Section 4, of the U.S. Constitution, which states, “The President, Vice President and all civil officers of the United States, shall be removed from office on impeachment for, and conviction of, treason, bribery, or other high crimes and misdemeanors.”

According to their reading of the text, these scholars say impeachment is for current officeholders, and since Trump had already left office, the Senate’s jurisdiction—or authority—to hold an impeachment trial expired on Jan. 20, when his term came to a close.

On the other hand, scholars who are arguing that the upcoming trial is constitutional say that the impeachment power and the Senate’s jurisdiction needs to be read in conjunction with Article I, Section 3, which states, “Judgment in Cases of Impeachment shall not extend further than to removal from Office, and disqualification to hold and enjoy any Office of honor, Trust or Profit under the United States.”

These scholars also contend that the argument for impeachment is supported by historical precedents.

Schoen also signaled that he and attorney Bruce Castor Jr. will also argue that Trump’s speech at the rally on Jan. 6 is protected by the First Amendment.

“This is a very, very dangerous road to take with respect to the First Amendment, putting at risk any passionate political speaker,” Schoen said.

The media, lawmakers, former officials, and other critics have put the blame on Trump for the Jan. 6 Capitol breach and have been calling for his impeachment. Hours earlier, the president addressed a crowd in Washington D.C. where he reiterated allegations about election irregularities and potential fraud, and his dissatisfaction with the media and several lawmakers. Before calling on his supporters to “fight like hell” to be well-represented in Congress, Trump urged supporters to protest “peacefully and patriotically” at the U.S. Capitol.

The breach at the U.S. Capitol began before Trump had finished his speech at the rally, according to a timeline compiled by The Epoch Times. As the incident escalated, Trump continued his urge for peace and respect for law enforcement throughout the afternoon.

Following the incident, Trump condemned the “violence, lawlessness, and mayhem,” saying that those who “infiltrated the Capitol have defiled the seat of American democracy.”

The Justice Department and FBI have also announced that they have charged protesters who had conspired to breach the U.S. Capitol days before the incident, a detail that challenges the argument put forward by the media that Trump’s speech on Jan. 6 was the impetus for the violence.

“President Trump has condemned the violence at all times. Read the words of his speech. [He] calls for peacefulness. This has nothing to do with President Trump,” Schoen said.

Powell Is Promoting A Public Perception Of Inflation That Is False: Fed Admits It In New Forecasts