Yesterday, the Democrats’ House impeachment managers formally invited former President Trump to testify “either before, or during” his Senate impeachment trial (and face cross-examination). Questions would specifically focus on his role in “inciting a mob”  – as the Democrats put it – to “attack” the Capitol on Jan. 6.

Well, Trump’s team has finally come up with their answer, and it’s a resounding “no”. But not only that: Trump advisor and spokesman Jason Miller also denounced the Democrats’ continued fixation with impeachment as “an unconstitutional proceeding” and “a public relations stunt”. Trump’s senate “trial” will proceed on Feb. 9 after the House already passed articles of impeachment, officially making Trump the first president to be impeached twice. 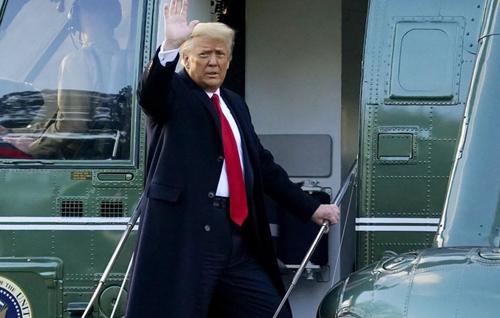 Democrats say following through with the trial is important to ensure that Trump faces “accountability” for the events of Jan. 6, when a crowd of his supporters rallied at the Capitol following a speech by Trump where he urged them to pressure VP Mike Pence to reject the results of the 2020 presidential vote and reinstall Trump for another term. Even though they Dems know full-well that Trump and anyone in his orbit will simply refuse to testify, or simply ignore subpoenas like they did last time, if it comes to that.

But while the trials’ political and theatrical elements are obvious, the real reason Democrats seem so obsessed with impeachment is that if they can swing a conviction, they could then hold a second vote to “disqualify” Trump from ever seeking office again, which would rule out the 2024 run that Trump has promised his supporters (though he’ll be in his late 70s).

Hours after the Democrats’ request was revealed, Trump adviser Jason Miller dismissed the trial as “an unconstitutional proceeding” and said the former president would not testify. Separately, Trump’s lawyers denounced the request as a “public relations stunt.”

A few hours after Jamie Raskin, who is leading the impeachment management team, asked Trump to testify, Trump attorneys Bruce Castor and David Schoen responded that the letter to Trump from the Democrats proves that Democrats “cannot prove your allegations” and that an impeachment trial is too serious “to try to play these games.”

Raskin responded that Trump’s refusal “speaks volumes and plainly establishes an adverse inference supporting his guilt.” Democrats have repeatedly argued that Republicans are resorting to calling the process “unconstitutional” because they can’t defend the former president’s actions, and they point to the many legal scholars who have said the trial is on firm constitutional ground.

“Any official accused of inciting armed violence against the government of the United States should welcome the chance to testify openly and honestly – that is, if the official had a defense,” he said in a statement.

Meanwhile, defense lawyers and many Senate Republicans have argued that the trial is unconstitutional because Trump is no longer in office, even though he was impeached while he was still president. In a test vote in the Senate last week, 45 Republicans voted for an effort to dismiss the trial on those grounds.