Turkey’s foreign ministry on Friday confirmed that it’s granted permission for US warships to use the Bosporus and Dardanelles straits to enter the Black Sea at a moment tensions with Russia over Ukraine are spiraling higher with tit-for-tat threats. Given it revealed the initial notification was two weeks ago, a pair of American warships are expected imminently to enter the Black Sea.

The foreign ministry said in a statement while referencing the treaty that regulates passage through the straits: “A notice was sent to us 15 days ago via diplomatic channels that two U.S. warships would pass to the Black Sea in line with the Montreux Convention. The ships will remain in the Black Sea until May 4.“ 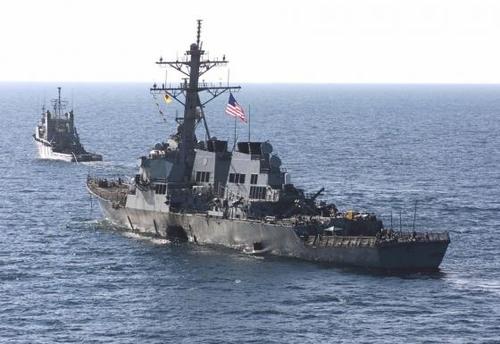 Typically the US gives 14-days notice prior to sending warships into the Black Sea, according to the long established treaty with Turkey regarding use of the Bosporus to enter the waters.

And Reuters notes the significance of the timing as follows: “The United States has informed Turkey that two of its warships will pass through Turkish straits to be deployed in the Black Sea until May 4, Ankara said on Friday, as Russia has bulked up its military forces on Ukraine’s eastern border.”

Late Thursday an unnamed US defense official had told CNN the warships would be deployed “in the next few weeks in a show of support for Ukraine,” and further the deployment would “send a specific message to Moscow that the US is closely watching,” according to the report.

The U.S. plans to send two warships to the Black Sea in a show of its support for Ukraine amid Russian militarization along its border https://t.co/bxfnKEq4WX

Importantly, all of this comes just days after Ukraine’s president Volodymyr Zelensky personally urged NATO to immediately expand its Black Sea presence. He had said in a phone call with NATO Secretary-General Jens Stoltenberg, “Such a permanent presence should be a powerful deterrent to Russia, which continues the large-scale militarization of the region and hinders merchant shipping,” the president’s press service indicated in a readout.

Zelensky had also traveled to the site of frontline renewed fighting in the Donbas region on Thursday in a show of support to Ukrainian national forces who are clashing with Russia-backed separatists.

The President of Ukraine Zelensky has visited the Donbass frontline. pic.twitter.com/kZDf6OcWI5

While American vessels have long operated in the Black Sea, even semi-regularly conducting drills there, this time the US ships are being sent there specifically as a “warning” to Moscow.

But Russia’s Defense Ministry on Thursday announced naval maneuvers of its own, confirming that it’s moving more than 10 navy vessels from the Caspian Sea to the Black Sea in order to conduct naval exercises.

With the rival naval build-up on the Kremlin and Ukraine’s doorstep, and with the mutual amassing of troops on either side of the border… what could go wrong?