As President Biden and Kamala Harris tour her home state (and rival Democrats in Congress cook up legislation to officially expel her from the legislature) controversial Georgia Rep. Marjorie Taylor Greene has been suspended from Twitter yet again. 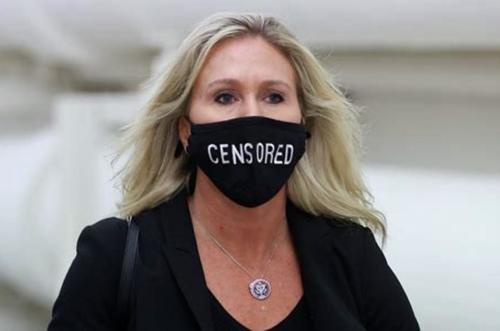 Greene, who has been slammed by Democrats for allegedly helping to instigate the Jan. 6 Capitol Riot (we thought it was Trump’s fault?), said in a campaign message that Twitter had suspended her account around 0100ET Friday for 12 hours “without explanation.” Twitter has so far declined to comment on the decision.

“They’re doing everything they can to silence me, because I am a threat to the Swamp!” she claimed in an interview with Vice.

Although all of Greene’s tweets remain live, Greene can only use her account for sending direct messages to her followers, but can’t tweet, like, or retweet any content until the suspension is lifted. Greene shared a screenshot of the suspension notification to her Telegram account. 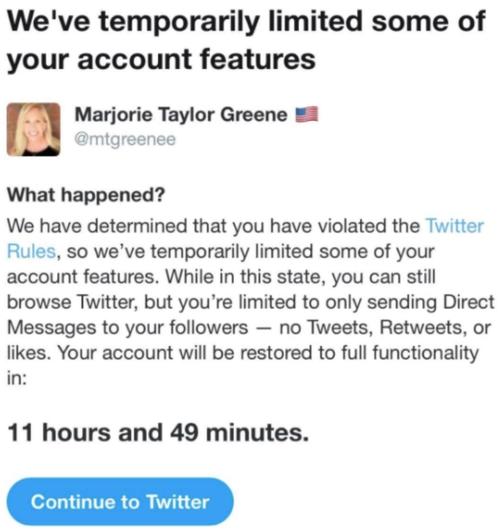 Greene’s office raised suspicions about the timing of the ban, which was apparently implemented just hours before California Rep. Jimmy Gomez introduced a resolution to expel Greene from Congress. There was no immediate evidence to back up the suspicions.

“I believe some of my Republican colleagues, and one in particular, wish harm upon this legislative body. And I’m not saying this for shock value,” Gomez during a statement made on the House floor Friday morning. “It’s the conclusion I drew after a member of Congress advocated violence against our peers, the speaker and our government,” Gomez said of Greene.

Gomez accused Greene of being responsible for the Jan. 6 intrusion, using extremely dramatic language before claiming that he takes “no joy” in introducing the resolution to expel a colleague.

“It is what I believed after this chamber was turned into a crime scene just 10 weeks ago. It’s how many of us felt sheltering in this room as the Capitol was breached. Some members called their loved ones to say goodbye, others prayed to their God, and I asked myself if this would be the day our democracy died,” Gomez said. “I take no joy in introducing this resolution, but any member who incites political violence and threatens our lives must be expelled, and I’ll do everything I can in my power to protect our democracy and keep all my colleagues safe,” he said.

The House passed a resolution to strip Greene of her committee assignments last month, constraining her influence in the legislature. All Democrats and 11 Republicans supported the move. The new resolution to suspend Greene has been co-sponsored by six dozen House Dems.