Uber had its work cut out for it reporting earnings one day after Lyft’s blowout earnings report, and sure enough despite a modest beat on EBITDA, the company missed on gross bookings and revenue and even though just like Lyft the company said that it remained “well on track to achieve 2021 profit goals”, the stock has slumped after hours.

Here is a breakdown of the key Q4 results: 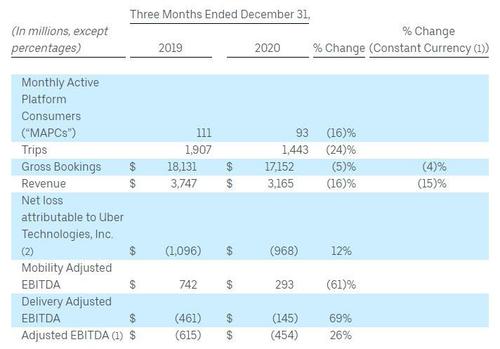 This is how Bloomberg summarized the quarter:

Uber Technologies Inc. narrowed its loss in the fourth quarter, riding a wave of deals that shed some of its more fanciful pursuits and added revenue-generating delivery businesses. In its quarterly results, the San Francisco-based company said it’s still on track to turn an adjusted profit some time this year.

While the core ridesharing business remains depressed due to covid, the company’s delivery business continues to grow as delivery gross bookings grew a whopping 130% year-over-year, to $10.05 billion. Uber also trumpeted other delivery growth, as restaurants on the platform increased 75% YOY in the fourth quarter and now exceed 600,000. On the other hand, mobility revenues plunged by 50% to just $6.79 billion. 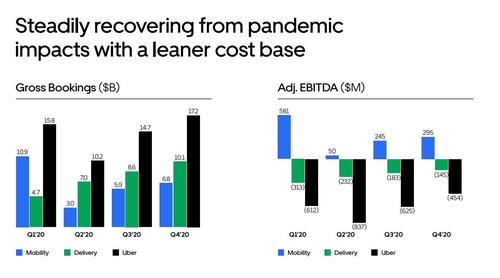 Now the good news: while Uber saw a big drop in riders, on average they spent more than $60 a month, which was well above the $45.40 per rider reported by Lyft yesterday.

Remarkably, despite having been in operating for a decade, Uber has yet to generate cash flow once, and in just the past 4 years, the company has burned $9.8 billion in cash despite generating over $45 billion in revenue. 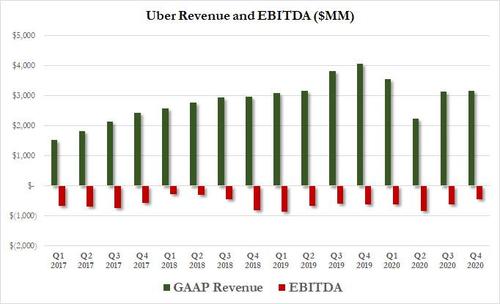 “While 2020 certainly tested our resilience, it also dramatically accelerated our capabilities in local commerce, with our Delivery business more than doubling over the year to a nearly $44 billion annual bookings run-rate in December.”

To shore up liquidity, Uber announced that it had completed the sale of approximately $207 million of our Didi shares: The company also said that it had entered into an agreement to sell approximately $293 million additional Didi shares on the same terms, the closing of which remains subject to certain closing conditions and is expected to occur in Q1 2021.

Why did Uber do this? Because the company ended December with just $5.6 billion in cash, which while more than expected, was only about half of what the company had at the end of 2019. Will the company start to cash out of more investments now to bolster it cash should covid last longer than the company expects.

Bloomberg reported in September that Uber was selling part of its stake in the Chinese ride-hailing company Didi Chuxing. As we noted earlier, Uber said today that it sold $207 million of the shares and has an agreement to sell $293 million more. It ended the quarter with a little more than $9 billion in such investments, of which Didi represents the overwhelming majority.

The stock initially tumbled as much as 4% before slowly recouping much of the losses. 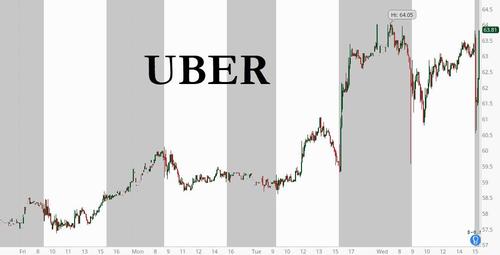 Two Decades Of Airline Passenger Traffic Wiped Out In 2020