Police in the UK enforcing coronavirus lockdown restrictions are threatening people with £200 fines if they engage in snowball fights or sledging. 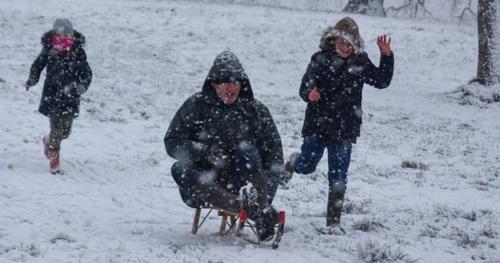 Snow fell in many parts of the country over the weekend, providing a welcome distraction to the fact that the country has been under some form of lockdown for the best part of 10 months.

However, this prompted authorities to become even more draconian, urging people not to engage in snowball fights or sledging or face the risk of being fined.

“We are currently receiving lots of calls and reports relating to snowballs being thrown and people outside sledging,” tweeted Surrey Police.

Wiltshire Police inspector Louis McCoy was more insistent, tweeting, “I don’t want to be dealing with sledgers and snowball fights. There’s still a lockdown on. Think about it, don’t be tempted.”

Swindon Police posted a message to Facebook announcing that they were keeping tabs on snowball fights.

“We are currently responding to reports of about 150 children and about 50 adults gathering in the Sevenfields area of Swindon and concerns have been raised that they are not abiding by the coronavirus guidelines,” said the force.

“Please do not gather in large groups – you are reminded that Fixed Penalty Notices may be issued to those who do not abide by the regulations.”

“We are in the midst of a pandemic and failing to socially distance and wear face masks could aid the spread of the virus.”

Meanwhile, Kingston Police urged people not to go out and enjoy the snow at all, tweeting that they should only look at it “from the comfort of your own home” as “there’s a pandemic going on.”

It’s so beautiful to watch the snow fall from the comfort of your own home. Plus there’s a pandemic going on. #StaySafe in the #snowday by playing in the back garden!

Four men traveling in a car in Guildford were also hit with £200 fines each after they told police they were “looking at the snow.”

As we previously highlighted, engaging with snow is seen by authorities as a dangerous contravention of lockdown rules.

West Mercia Police attracted ridicule when the force angrily tweeted about “2 reports of snowballs being thrown” in violation of coronavirus lockdown rules.

A large snowball fight in a park in Leeds also attracted media condemnation despite students involved claiming they were just trying to blow off some steam to combat mental health problems caused by lockdown.

Avon and Somerset Police also fined someone for eating a kebab in their car alone while Derbyshire Police interrogated two women for drinking coffee while on a rural walk.

The UK remains under total lockdown with powers recently extended until July, meaning the country could still be under such restrictions until the summer.