State and county officials across the US are still struggling with a backlog in new cases, but just as hospitals in LA County and other hard-hit areas seemed to be at their breaking point, it appears the number of hospitalizations and deaths are starting to slow – even as Joe Biden and Dr. Fauci continue to warn that the worst lies ahead. 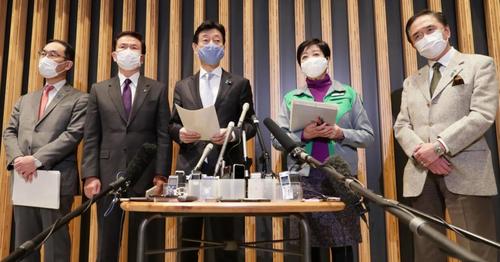 But the US isn’t the only country struggling with surging COVID-19 numbers: over the past few days, as the situation in Tokyo has intensified with the number of confirmed new cases reaching unprecedented levels, Japanese officials are demanding the government impose new restrictions on movement and business. 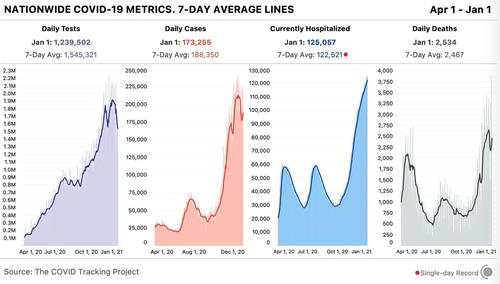 Still, US hospitalizations – seen as the most reliable indicator of the pandemic’s trajectory – climbed to a new high late Friday, with 125.3K people admitted, according to data compiled by the COVID Tracking Project. That compares with the two previous waves of the virus, in April and in July, that peaked at about 60K.

COVID Tracking Project said Saturday that it will likely take at least another week before the data in the US “return to normal.”

Following a meeting that lasted longer than three hours, Koike told reporters that the government must restrict the movement of people because coronavirus cases are surging at an unprecedented rate. Nishimura, Japan’s COVID point-man, said he recognizes the governors’ tough situation, and added that the government would take the request “seriously”.

“We take this request seriously…and will consider measures accordingly.” We agreed that we are in a severe situation that warrants us considering the declaration of a state of emergency,” Nishimura said.

However, he added that the government needs to consult with its coronavirus expert panel before making a decision.

The number of new cases reported in Tokyo has surged over the past week, with a record 1.3K reported on Thursday. The government in April declared a state of emergency for seven prefectures, including Tokyo and Osaka, before expanding the measure nationwide. The emergency was lifted on May 25.

Elsewhere, authorities in Sydney, Australia (along with other parts of New South Wales) tightened rules on mask-wearing, ordering people to wear masks in shopping malls and on public transit as Australia’s most populous state tries to control another outbreak.

In the UK, the record run of new cases continued, with authorities reporting more than 57K new cases on Saturday morning (cases were confirmed over the past 24 hours).