Headline UMich Sentiment weakened in January, falling from 79.2 in December to 79.0 (well below the 79.4 expected) with both current conditions and future expectations weakening.

The gauge of current conditions slipped from the preliminary reading to a three-month low of 86.7, while the expectations measure edged up to 74, according to surveys through Jan. 25. 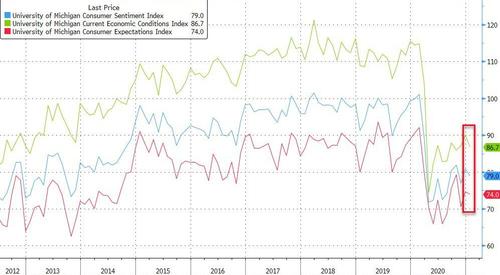 Sentiment levels were well below the average of 97.0 from 2017 to 2019, but UMich claims that this recent ‘stabilization’ is due to…

Although the nation is still being ravished by the pandemic, and the nation’s cooperative reactions have been far from perfect, the overall stability of consumer confidence has benefitted from wearing masks and social distancing, the quick substitution of home for office work, and the prompt distribution of generous federal benefits.

In contrast to the reduced levels but relatively stable trends in consumers’ economic expectations, partisan views have remained quite volatile. In the past three months, the Index of Consumer Expectations, the primary gauge for the future performance of the economy, has jumped among Democrats to 91.8 in January from 68.6 in October, and among Republicans it has plunged to 51.4 in January from 96.4 in October. 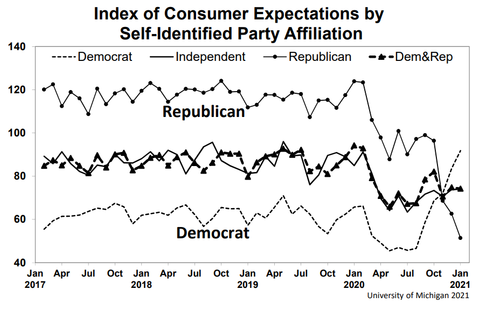 This reverses the shift which occurred when Trump was elected and maintained throughout his term in office. The data also indicate that the weighted average across Democrats and Republicans (74.2) has closely followed trends for Independents as well as the all-household average. The sharp partisan differences have been effectively neutralized with respect to economic expectations, although still exerting a dominant force shaping public discussions.