Just as technology has underpinned economic growth for decades, the future of flying electric taxis will revolutionize transportation while transforming urban mobility into a greener, zero-emissions world.

Archer, a leading Urban Air Mobility startup and developer of all-electric vertical take-off and landing (eVTOL) aircraft, has entered into a purchase and collaboration agreement with United Airlines for its battery-powered aircraft.

United placed a $1 billion order for Archer’s eVTOL aircraft with an option for an additional $500 million of aircraft. United, along with Mesa Airlines, are preparing to transport customers with Archer’s eVTOL zero-emission aircraft by 2024. 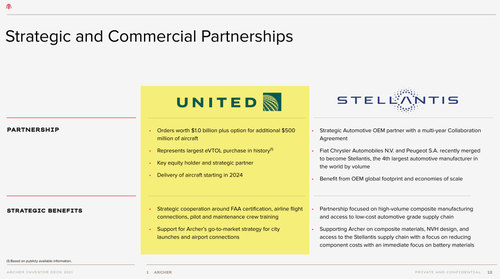 “By working with Archer, United shows the aviation industry that now is the time to embrace a cleaner, more efficient modes of transportation. With the right technology, we can curb the impact aircraft have on the planet, but we have to identify the next generation of companies who will make this a reality early and find ways to help them get off the ground,” Kirby said.

He added, “Archer’s eVTOL design, manufacturing model and engineering expertise has the clear potential to change how people commute within major metropolitan cities all over the world.” 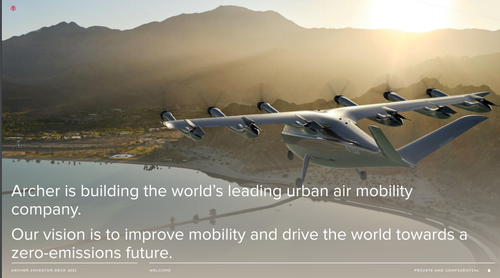 Archer is scheduled to unveil the eVTOL aircraft this year as it’s slated for series production in 2023.

Looking ahead, the eVTOL aircraft could fly customers between Hollywood and Los Angeles International Airport, significantly reducing CO2 emissions by up to 50% per passenger. 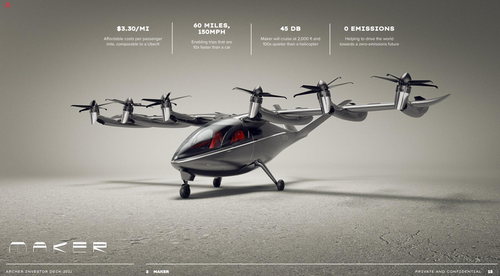 Morgan Stanley Research told clients last month that the eVTOL aircraft industry, transporting people around metro areas, could be a $1.5 trillion market by 2040.

“The intersection of many technologies, such as ultra-efficient batteries, autonomous systems, and advanced manufacturing processes are spawning a flurry of activity in this space,” wrote Adam Jonas, Head of Morgan Stanley’s Global Auto and Shared Mobility research team.

Already, German-based company, Lilium, signed a deal with the city of Orlando, Florida, in November to build the country’s first flying taxi hub with flight operations beginning in 2025.

By the midpart of the decade, some of us will be zipping around in zero-emissions air taxis, bouncing from city to city in minutes, while others will be stuck on the ground in traffic.