With median prices for both existing and new homes at all time highs, and soaring at a record annualized rate of almost 20%…

… increasingly more Americans find themselves priced out of homeownership and, unwilling to rent shoeboxes in those liberal bicoastal, record tax incubators, are instead opting to not purchase expensive (and stationary) homes altogether, and are picking a far cheaper (and mobile) option. 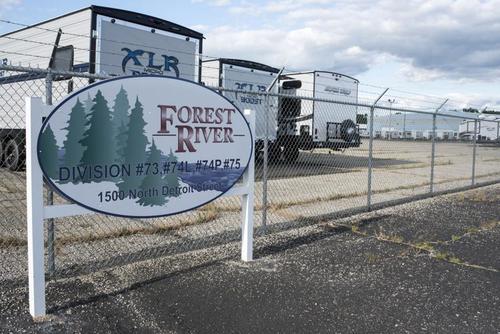 According to the RV Industry Association (RVIA), an industry association trade group that monitors the RV industry, manufacturers are shipping a record number of new units to dealer lots across the county that are being snapped up almost as soon as they arrive.

A February survey of manufacturers showed total RV shipments for the month topping out at 48,286 units, an increase of 30.1% compared to the same period last year, making February 2021 the best February on record. 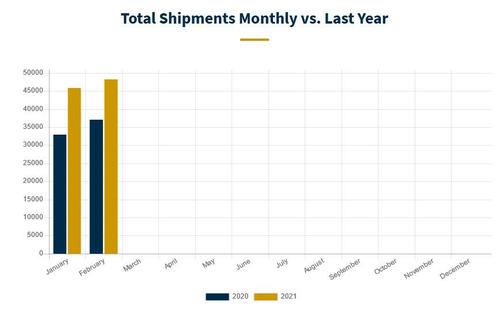 “As people begin to think about their spring and summer vacations, RV trips continue to be the preferred way to travel for millions of Americans,” said RV Industry Association President & CEO Craig Kirby. “As evident in this month’s record shipment report, RV manufacturers and suppliers are committed to meeting the demand from new consumers as well as those looking to upgrade their existing RVs. According to the report, the industry remains on track to build more RVs in 2021 than in any previous year.”

It’s part of a continuing trend the RVIA has been watching closely: “We’re on quite a streak right now,” said Monika Geraci, a RVIA analyst and spokesperson. “November and December were record-breaking months, too.”

According to the recent study commissioned by RVIA, RV wholesale shipments appear to be headed to their highest levels in 2021. Those projections show total RV shipments ranging between 523,000 units and 543,000 units for the coming year, representing a 23% increase over the 2020 year-end total of 430,412 units. It suggests a 5% gain over the record high of 504,600 units shipped in 2017.

“RV shipments in 2021 are forecast to reach record highs as the industry continues its over 40 years of long-term growth,” said Kirby. “We expect consumers to continue to turn to RVs not only because they allow people to recreate responsibly, but also because RVs allow people the freedom to live a fun, active outdoor lifestyle.”

Those numbers surprised even RV insiders, who said they thought 2020 would be a down year.

“A year ago when RV plants shut down for nearly two months, who would have thought we would be talking about record-breaking shipments less than a year later?” said Jeff Rutherford, president and CEO of Airxcel Inc. and RV Industry Association chairman. “The fact that 2021 is projected to be the best year ever for RV shipments speaks to the strengths of our industry and the incredible appeal of the RV lifestyle.”

One factor helping drive the stronger demand for RVs seems to be that they have found a new audience with younger customers. Studies show that 18- to 34-year-olds now make up 22% of the market of new RV buyers, a significant increase.

That study also found RV ownership has increased over 62% in the last 20 years, and now a record 11.2 million American households own RVs. Those numbers are split almost equally between those over and under the age of 55. Additionally, the study found 9.6 million households intend to buy an RV within the next five years. And of that, 84% of Millennials and Gen Zers who own RVs plan to buy another RV within the next five years, and 78% of them saying they want to buy a brand-new model.

According to the report, usage for RV owners remains steady at 20 days a year, while people who say they now intend to buy an RV also say they plan to use their new units for an average of 25 days per year. This increase is thought to be the result of changing attitudes toward working remotely and distance learning. Both give families more ability to be away from home, but still working, than in the past.

Nearly a third of the respondents in the study are “first-time owners,” underscoring the growth of the industry in the past decade. Ownership is spread widely not only across age levels, but also across genders.

In 2017, the industry’s best year to date, manufacturers built and moved just over half a million new units to dealer lots around the county, but those numbers pale when placed against the anticipated growth expected throughout this year.

“It looks like a significant increase over our best year ever,” Geraci said. “And that’s because many people are still looking forward to taking that RV trip they dreamed of. There’s really continued customer demand. Inventory on dealer lots continues to be at historic lows because of the demand by consumers. Based on those two factors alone, it should be a really strong year for the industry.”

Demand for new RVs was strong before the pandemic and stronger still during and after. Geraci said RVIA has been watching demand steadily grow over the last decade.

“If we look back 13 months ago, the RV numbers were really strong. They were up over 2019. So even pre-pandemic, people were looking at RVs. Add the pandemic on top of that, where you had people who had maybe thought about RVing suddenly jumping in,” she said.

While large segments of the travel industry suffered due to the pandemic, it appears that people’s appetite to travel failed to decrease, making RVs a great alternative. Geraci said an RV allows people bring along their own bedroom, kitchen and bathroom, giving most the travel solution they were looking for.

RVs became hot in 2020 when more traditional travel and vacation plans, including air travel, cruising and hotel stays, were crushed by the pandemic. Instead, Americans opted to snap up RVs and hit the road as a safer alternative for their time off.

“It’s easy to social distance in an RV,” she said.

Traditional trailers, units that are pulled behind a truck, still dominate the industry and account for the lion’s share of all sales. But demand for fifth wheels, vans and motorhomes are all up by as much as 20%.

“I Am Not Impressed. Ms. Powell Retracts Nothing” – Lin Wood Responds to Dominion Voting Machines Threats to Sidney Powell