US Capitol Placed On Lockdown Over Suspected Tent Fire Under Bridge

Update (1050ET): Washington D.C. appears a bit jumpy, as the lockdown was apparently over a “small fire involving a tent that is now out,” according to CNN‘s Manu Raju.

Things seem to be OK at the Capitol. DC Fire’s Vito Maggiolo says the incident involved a small fire involving tent that is now out. DC fire was dispatched at 10:14 and the fire was put out. He said the response was “very minimal” and it was “pretty much a non-incident.”

The US Capitol has been locked down after an undisclosed “external security threat” was identified “located under the bridge on I-295 and First and F Streets SE,” according to an email sent to people who work on the Hill. 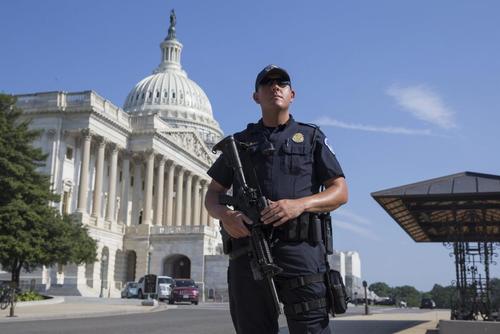 No entry or exit is permitted at this time, however those already within the complex are allowed to “move throughout the buildings,” but are advised to “stay away from exterior windows and doors.”

“If you are outside, seek cover,” reads the email.

Here’s what was just sent via email to people who work on the Hill: building complex on lockdown bc of “external security threat” under a bridge outside the complex pic.twitter.com/Q2aW1oBoTf

The lockdown comes as DC prepares for Wednesday’s inauguration with approximately 20,000 National Guard troops, while the entire National Mall remains closed to the public and a “secure military zone” has been established throughout the entire downtown area.

Roads, bridges and Metro have all been shut down within that zone, according to WUSA9.

Meanwhile, a huge plume of smoke was seen on the 100 block of H Street Southeast near the Navy Yard. It is unknown if the two incidents are related.

Russia Advances In The Field Of Autonomous Combat Robotic Platforms

After Hours: Past, Present and Future (PODCAST)