COVID vaccinations reached an important global milestone yesterday, with the number of patients who have received at least one dose topping the number of confirmed cases globally yesterday as rich countries in the West lead the way (along with Israel). But it wasn’t the only mllestone reached overnight. Both the Netherlands and the Czech Republic have joined the list of nearly two dozen or so countries who have topped 1MM COVID cases, with the tiny Czech Republic by far the smallest of these. Global deaths rose day over day yesterday, adding 15.7K to the death toll and bringing it to 2.27MM, but the overall trend remains lower. Cases also rose globally day over day, up 522K yesterday to top 104MM, though they remain in a downtrend, along with hospitalizations. 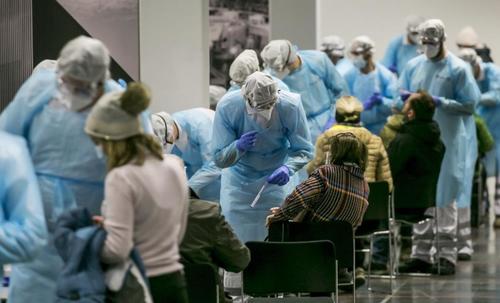 In the US, new cases dropped below 120K yesterday, coming in at 117K, while deaths came in at just above 3K, while hospitalizations also declined. 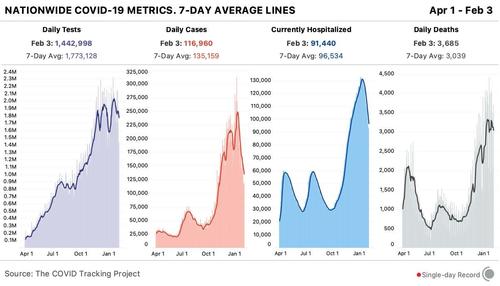 Using a time-lag case-fatality rate, COVID cases and deaths are expected to continue declining in the US; with any luck, the national daily percent positive (of total tests, said to be a key metric in measuring actual spread of the virus) might be below 5% for the first time since October by the end of the month. 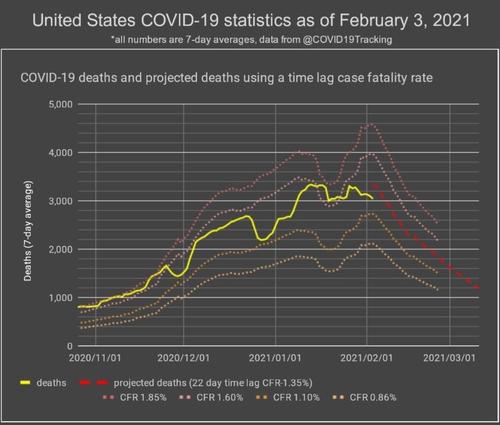 In other news,  British government scientists warned yesterday that society won’t be “back to normal” until the end of summer, once every person over the age of 50 has been vaccinated. The news came as PM Boris Johnson confirmed that the UK government had succeeded in vaccinating one in five British adults. In response to the upsetting news, which preceded this morning’s announcement of looming negative rates by the Bank of England, Chancellor Rishi Sunak questioned whether the government’s scientist advisors were once again moving the goal posts, and moving the focus from “protecting the NHS” to getting case numbers to rock bottom levels.

On the vaccine front, AstraZeneca and Oxford announced that they would soon begin a trial featuring other jabs, like the Moderna and Pfizer jabs, that will examine whether thee can be “greater flexibility” in how they are distributed. In China, Sinovac, one of the Chinese COVID-19 vaccine makers whose shot has already been approved for use in Brazil, Chile and Indonesia, as well as emergency use in mainland China, is applying for general use approval in China. While that “green light” is almost assured, it would make the vaccine one of the first in the world approved for non-emergency use (though this phrase has become something of a technicality). The company’s shot is called CoronaVac. Sinovac said in a statement released Thursday that its vaccines were safe for the elderly.

The Swiss government said on Wednesday it had signed an agreement with German pharmaceuticals company CureVac and the Swedish government for the delivery of 5M vaccine doses from the European vaccine maker, the news comes the same day its drugs regulator declined to approve the AstraZeneca jab-Oxford jab. Australia, meanwhile, has secured an additional 10M doses of the Pfizer-BioNTech vaccine and is on track to begin its vaccine roll-out towards the end of February.

Here’s some more news from overnight:

Back in the US, Chicago Public Schools again delayed a scheduled return to in-person classes after school officials and the teachers’ union failed to reach an agreement on safely opening. President Biden is pushing to resume in-person learning in his first 100 days, but teachers’ unions and districts are at odds over how to do so safely.

The Real Reason Why Your Kids Can’t Go Back To School (Hint: It’s Not COvid-19)