The COVID “third wave” that first drew attention in Europe has moved beyond the Continent’s borders, and is officially afflicting India, South America and  many fear that soon it will come for the US.

And it’s not just new cases (which some have pointed out might be due to overly sensitive PCR testing picking up bits of viral RNA from the vaccine); deaths are rising, too. Earlier this week, the WHO warned that newly confirmed deaths are climbing for the first time after six weeks of decline. 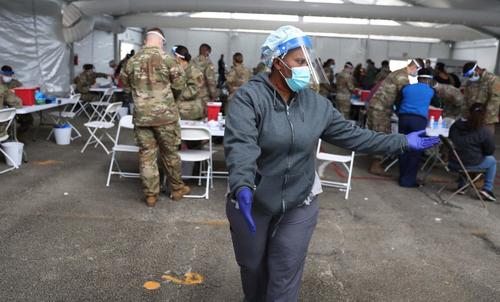 Maria Van Kerkhove, WHO technical lead on Covid-19, said the increase in deaths followed a fifth straight week of confirmed cases increasing worldwide. She said the number of reported cases went up in four of the WHO’s six regions, though there were significant variations within each region.

And just last night, the number of confirmed cases in the US topped 30MM, the latest milestone, as a growing number of states see cases rising, the result of restrictions being rolled back in most states (with some, like Texas, dropping all restrictions on business and movement), the growing spread of “variant” (ie mutant) strains of COVID, or both. Local health officials in NYC fear that these variants are responsible for faster-than-expected rates of spread in recent weeks.

Globally, deaths have reached 2.746MM, and although the 7-day average for daily deaths (roughly 10K) remains below its highs from late January, it’s pretty clear that the decline has stalled, and has even started to reverse.

The US is seeing daily cases stall out. The seven-day average of new cases jumped to 57,695 Wednesday, 9.5% above the prior week, marking the biggest increase since Jan. 12. 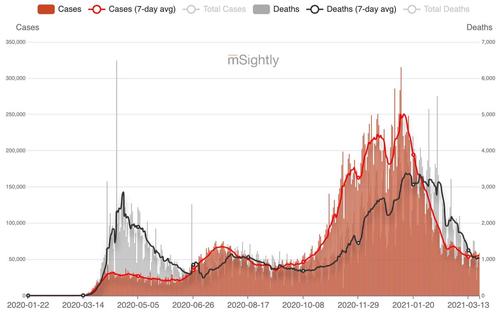 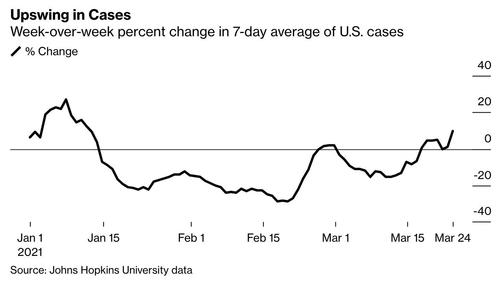 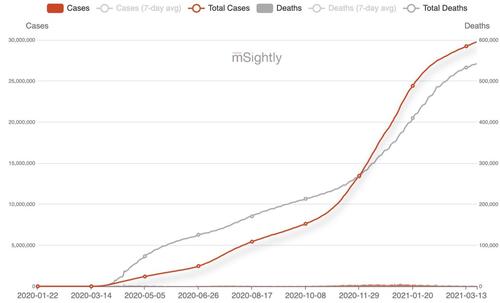 The number of people hospitalized with COVID in the US has continued to decline, albeit at the slowest pace since mid-January. Currently hospitalized patients have fallen to 39,287, down 72% from the early January peak. Meanwhile, the seven-day PCR test positivity rate has edged higher to 4.6% from 4.1% recently. 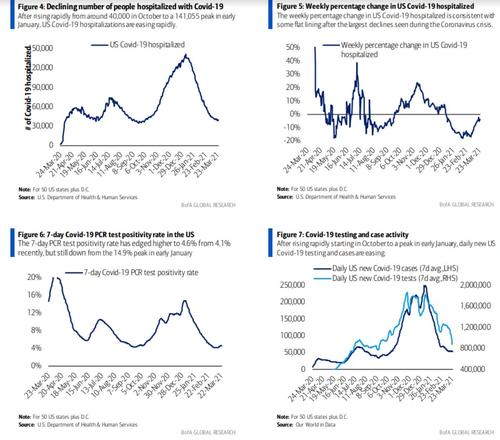 In India, where cases have been rising for a month now, fears about another wave of the virus rattled markets on Thursday.

The Sensex, India’s benchmark index, tumbled amid what Bloomberg described as “worries over a resurgence in coronavirus cases in the country.” The reported noted that “some areas in India, including the financial capital Mumbai, have seen a surge in new virus cases, raising concerns that fresh lockdowns could be imposed.” Just yesterday, we reported that scientists at a leading government institute had identified “double mutations” that they fear could supercharge the next wave of the virus (especially if India’s Serum Institute can’t produce enough jabs in time). Cases are hitting a five-month high in India, which has also prompted the country to limit exports.

As the EU and UK reach an uneasy truce while Brussels threatens to withhold vaccines produced on the Continent from their promised destinations, Bloomberg’s global vaccine tracker showed Thursday morning that vaccinations had reached 458MM.

Despite Dr. Anthony Fauci’s warnings, more cities, including NYC and LA, are reopening schools, and continuing with some planned rollbacks, even after NJ Gov. Phil Murphy said he would halt the Garden State’s reopening trajectory. 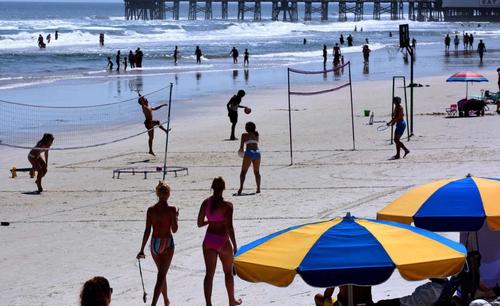 An almost 10% uptick should have US states reconsidering reopening plans and trying to accelerate vaccinations, said Isaac Weisfuse, a medical epidemiologist and adjunct professor at Cornell University.

Now is not the time to let up. We have the goal in sight, we need more vaccines and we need more effective ways to get it out,” Weisfuse said. “It’s really nothing short of a tragedy for somebody to get infected and die at this stage.”

Speaking at a White House briefing Thursday, CDC director Dr. Rochelle Walensky said she’s keeping a close eye on an uptick in COVID cases. “What concerns me is the footage of what’s happening in spring breakers, in people who are not continuing to implement prevention strategies while we get fully scaled up.”

Earlier Thursday morning, NYC Mayor de Blasio announced that Broadway would reopen in September. Meanwhile, following a flood of spring breakers in Miami that drew national and international media attention, the CDC has just announced that it will be monitoring for any sign of a spike in COVID cases in the areas where spring breakers congregated (though locals were responsible for plenty of the chaos). Meanwhile, President Biden is announcing a new vaccination goal, while Florida on Thursday became the latest US state to lower the vaccination age to 18 (children are net yet approved to receive the vaccine).