New confirmed coronavirus cases and hospitalizations in the US continued to fall on Friday, despite all the fearmongering about the “mutant” COVID strains, and the CDC’s warning about a post-holiday surge. The US added 165.3K new cases, bringing the total to 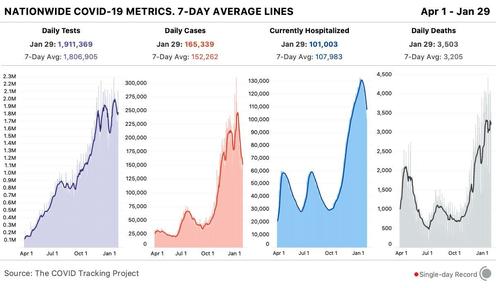 Hospitalizations continued to fall across the US. 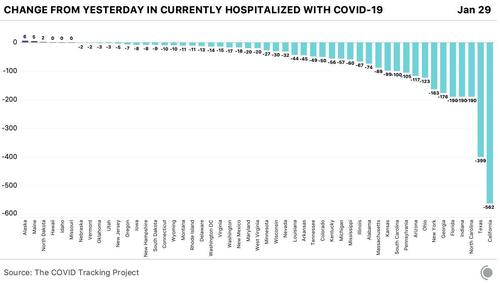 …while daily deaths internationally have only just started to move off their peaks from earlier this month.

Most of the big news on Saturday morning concerned the ongoing battle in Europe over the supply of vaccines, which is threatening to unleash a wider political and economic maelstrom that could destroy global collaboration on vaccines – or at least that’s what Bloomberg reported. Virus mutations that likely offer some resistance to vaccine and antibody treatments are now prevalent in South Africa and Brazil, as global scientists frame the threat of mutations as a problem for the developing world.

This is why, the WHO and Bill Gates argue, the US must rejoin Covax, the WHO program to deliver vaccines to the developing world, which has reached a new milestone on Saturday as the World Bank committed $12BN to supporting the program for Afircan countries, while Novartis will be able to deliver “substantial amounts” of Pfizer Inc. and BioNTech SE’s vaccine, according to its CEOs.

On the US front, so far, about 49MMn doses have distributed and about 23.5MM people have received their first of two shots and 5MM have received both, according to Bloomberg. Last month, Trump administration officials had projected that 30MM people could be fully vaccinated by the end of January.

People split on whether they’ll travel for the holidays