Yesterday was a mixed bag for the US on the COVID front: After the US topped 400K COVID deaths earlier this year, the US saw a new daily record number of deaths to coincide with Biden’s inauguration. Meanwhile, the WHO finally acknowledged that the “conspiracy theorists” were right about the COVID “case-demic”, and that Ct overmagnification during PCR testing might be producing many false positives. 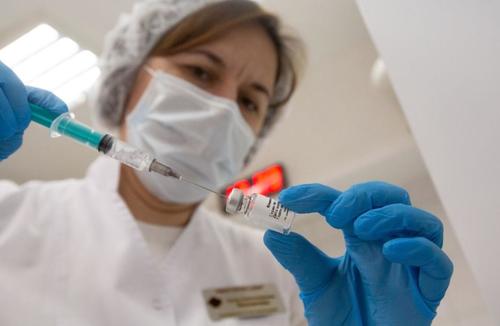 On Monday, it appears more evidence is beginning to emerge that COVID hospitalizations in the US are seeing a trajectory-shift which should feed through to lower mortality numbers in the weeks ahead, according to models produced by analysts at Goldman Sachs. 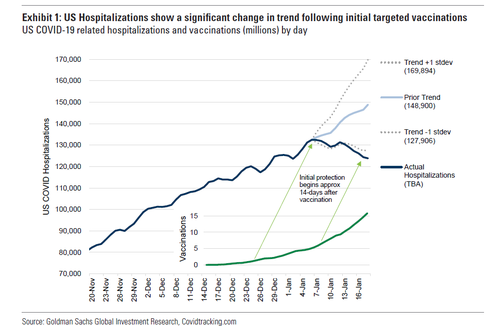 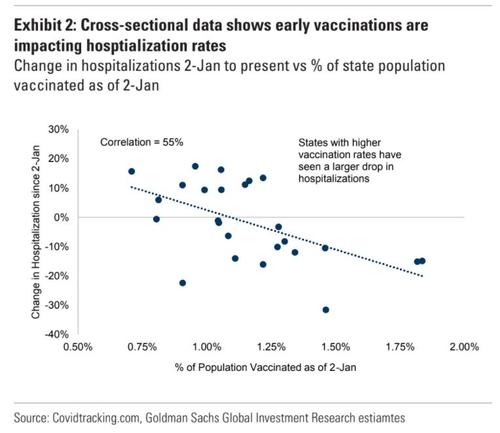 As the COVID Tracking Project data show, daily cases have continued to move lower in all four regions of the country, while nationally hospitalizations have started to dip (a trend that, as Goldman’s charts suggest, may be extended). 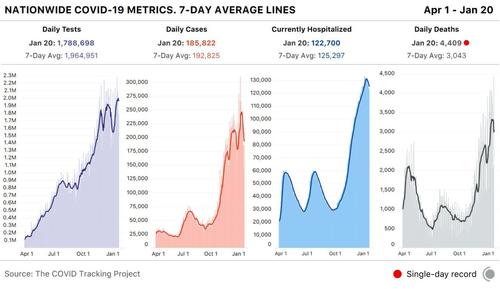 It’s just the latest sign that Wall Street truly believes that we have reached “the beginning of the end” of COVID…whether that actually turns out to be accurate, however, is another story.

Meanwhile, after Biden officially ordered the US to halt its departure from the WHO yesterday and rejoin its Covax vaccine-sharing program spearheaded by Bill Gates, Dr. Anthony Fauci appeared at an early morning meeting Thursday where he reaffirmed America’s commitment to the WHO.

Dr. Fauci, who will now lead the US delegation, said “I am honored to announce that the United States will remain a member of the World Health Organization.” His words marked the first public statement by a member of Biden’s administration to an international audience – and a sign of the priority that the new president has made of fighting COVID-19 both at home and with world partners.

Meanwhile, over in the EU, Viktor Orban’s Hungary has become the first EU country to grant approval to “Sputnik V”, the COVID vaccine developed by the Gameleya Institute and Russia’s Sovereign Wealth Fund. Orban’s regime coupled the approval with a complaint that it has been unable to procure enough (western-made) vaccines from Brussels, and so has been forced to look elsewhere. The UAE also approved the vaccine for emergency use on Thursday.

Here’s some more COVID news from overnight and Thursday morning:

Thailand approved AstraZeneca’s COVID vaccine for emergency use, making way for the country to begin inoculating its 67MM people as it endures an increase in coronavirus cases (Source: Bloomberg).

Saudi Arabia and Kuwait said they would reschedule vaccine appointments because of supply delays from Pfizer. Lebanon extended its nationwide lockdown, which began last week, for another two weeks (Source: Bloomberg).

Ireland has become the latest European country to extend its lockdown, which will continue “well into February” before the rules are “reviewed”, Prime Minister Micheal Martin said (Source: Bloomberg).

Finally, in the UK, the mutant COVID strain appears to be causing major strife as early evidence shows the strict lockdowns – England’s third, which citizens are starting to rebel against – haven’t had much near-term impact on reducing case numbers. The UK suffered its deadliest day yet, with 1.8K deaths recorded in 24 hours, as Boris Johnson’s chief scientific adviser warned some hospitals now look “like a war zone.”

MORE LIBERAL LIES: Jon Ossoff Lies About Kelly Loeffler After She Is Pictured in Photo with Some Guy She Doesn’t Know Who Was Once a Klansman

Kohl’s and Bed, Bath and Beyond will Stop Selling ‘My Pillow’ Products After CEO Mike Lindell Challenged Election Results