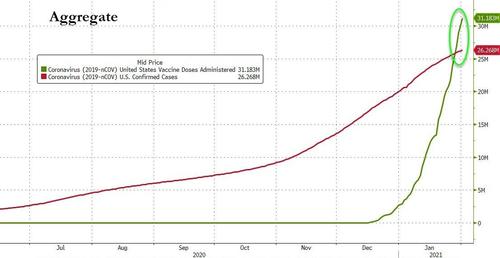 “It’s worth noting that today, for the first time, the data said that more people were vaccinated than were reported as newly diagnosed cases,” said Paula Cannon, a professor of microbiology at the University of Southern California’s Keck School of Medicine.

“That’s worth celebrating. I’m all for that win.”

The U.S. has been administering shots at a faster daily rate than any country in the world, giving about 1.35 million doses a day, according to data gathered by Bloomberg. 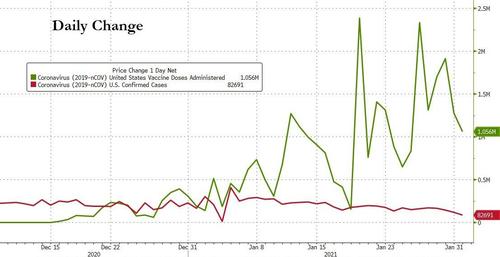 As Bloomberg reports, only a few other countries have crossed that milestone: Israel, the U.K. and the U.A.E. beat the U.S. to the more-vaccinations-than-cases line days or weeks ago.

“While these trends are encouraging, I want to stress that the numbers nationally are still high, and they’re as high as they’ve been at any point in the pandemic up to this point,” Jay Butler, the CDC’s deputy director for infectious diseases, said at a briefing Friday hosted by the Infectious Diseases Society of America.

“If this pandemic were a stock, we might be wanting to sell.”

It’s also important to make sure the right people are getting immunized in order to get the most benefit, said Bill Moss, executive director of Johns Hopkins University’s International Vaccine Access Center.

“There are a lot of people who are getting vaccinated who aren’t in high risk categories,” he said.

“If that’s the case, it’s going to take longer to see a reduction in serious disease and death. Everyone needs a vaccine at some point, but I’m concerned about the inequities in how the system has rolled out.”

Well, that may be out of Mr.Moss’ control, as PlanetFreeWill.news reports, despite the relentless push by the medical and political establishment for Americans to roll up their sleeves in acceptance of the new coronavirus vaccine, over half of Americans would either refuse or delay receiving the jab. 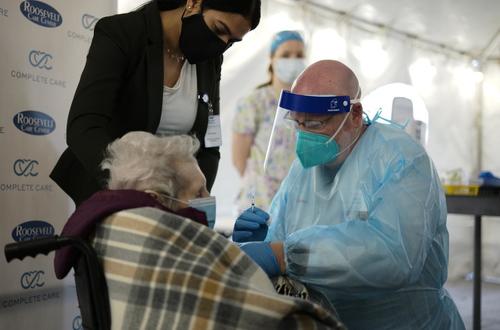 A new survey from the Kaiser Family Foundation found that 31% of Americans say they want to see further results about the vaccine’s effectiveness and side effects before committing to the shot.

Additionally, 13% are outright refusing to take it, and another 7% claim they only will if forced, taking the total of respondents reluctant to take or hesitant of the vaccine to 51% .

“Those who have not yet been vaccinated for COVID-19 have many concerns and information needs related to the new vaccines, particularly when it comes to side effects and the effectiveness of the vaccine,” the pollsters at the Kaiser Family wrote.

“About half say they don’t have enough information about the vaccine’s side effects or effectiveness, with higher shares of younger, Black, and Hispanic adults citing these information needs.”

While these January figures seemingly project that vaccine hesitancy is rising, when compared to the same survey from December the percent of those who are hesitant or unwilling actually decreased while the number of those who now want the vaccine as soon as possible has increased. 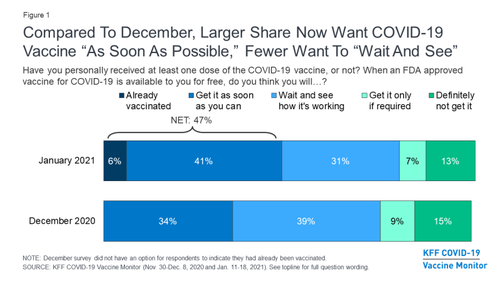 Still, the fact that the survey shows more than half of Americans are not yet ready, or simply don’t want the vaccine, flies in the face of a nation wide effort labeling the drive to vaccinate as one of the only avenues to return to “normalcy.”

As Alex Newman of The Liberty Sentinel puts it, the latest numbers may reflect a lack of trust in the governmental effort to distribute and have the vaccine administered.

Over half of Americans would refuse or “delay” taking the vaccine even according to rigged polls by the fake media. I only know a tiny handful of people who are planning to take it. Clearly nobody trusts the government or the press anymore 😍 https://t.co/ShbwnWIVAm

Considering the recent admission by Dr. Anthony Fauci that he lied to Americans to manipulate their acceptance of the new Covid-19 vaccine, Newman’s assessment this isn’t too far-fetched.

The intentional deception on behalf of Fauci involved estimates for what percentage of the population will need to be immunized to achieve herd immunity against Covid-19 to enable a return to normalcy.

“When polls said only about half of all Americans would take a vaccine, I was saying herd immunity would take 70 to 75 percent,” Fauci admitted.

Stunning data recently released by the Public Health Initiative of the Institute for Pure and Applied Knowledge, a non-profit medical research group, shows that the CDC  inflated the COVID fatality number by 1,600 percent as the 2020 presidential election played out, providing yet another revelation that could presumptively be a factor in the public’s largely ambivalent attitude towards the Covid-19 vaccine. This on top of a list of numerous report and analysis pointing to high false positive rates of PCR tests and side effects potentially being linked to the deaths of those the vaccine is manufactured to protect, arguably makes the skepticism is warranted.

With that noted, it comes as no surprise that US residents living in rural communities and identifying as Republicans remain among the most hesitant in getting the shot, according to the Kaiser Foundation survey.

As we highlighted earlier in the month, a Just the News Daily poll showed that nearly 50% of U.S. voters believe that public health officials have been misleading when providing data on the coronavirus pandemic.

WATCH: The evolution of Adam Carolla