Q4 GDP rose at an annual rate of 4.0% in the fourth quarter of 2020, missing consensus estimates of 4.2%; it was down from the record 33.4% annualized print in Q3. According to the BEA, the number reflected “both the continued economic recovery from the sharp declines earlier in the year and the ongoing impact of the COVID-19 pandemic, including new restrictions and closures that took effect in some areas of the United States.” 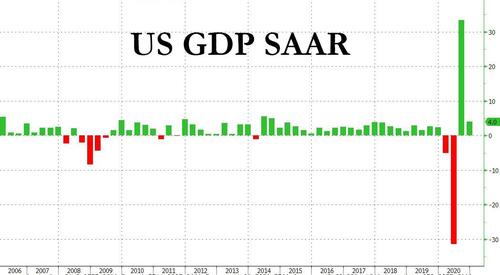 For the full year, Real GDP decreased 3.5% (from the 2019 annual level to the 2020 annual level), compared with an increase of 2.2% in 2019. The decrease primarily reflected decreases in consumer spending, exports, inventory investment, and business investment that were partially offset by increases in housing investment and government spending. Imports, a subtraction in the calculation of GDP, decreased.

Going back to the Q4 print, some of the highlights were that Personal consumption rose at 2.5%, well below the 3.1% estimate; at the same time Core PCE rose at 1.4%, above the 1.2% expected while the broader price index rose at 2.0%, below the 2.2% consensus.  Disposable personal income, a measure that has reflected the loss of jobs and the influx of government stimulus, fell 9.5% in the fourth quarter. That compares with a 16.3% contraction in the prior period.

The fourth-quarter increase in real GDP reflected increases in exports, business investment, consumer spending, housing investment, and inventory investment that were partially offset by a decrease in government spending. Imports, a subtraction in the calculation of GDP, increased.

Breaking down the components: 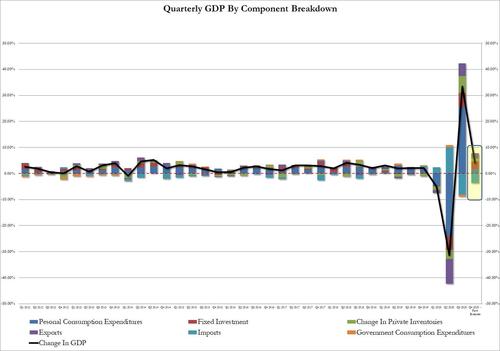 As Bloomberg notes, in nominal terms, GDP remains $267 billion below its peak, reached in the fourth quarter of 2019 (that hole is roughly the size of Finland’s economy).