Update (1010ET): We noted earlier that UK PM Boris Johnson was preparing to deliver another nationwide address this evening, presumably to announce an expansion of the UK’s “Tier 4” lockdown restrictions. 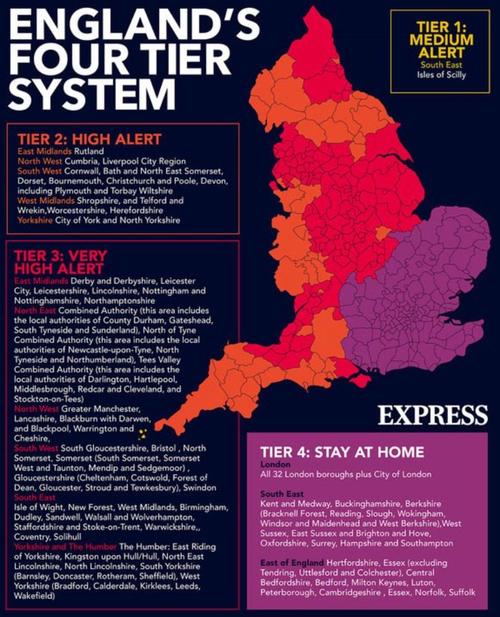 Well, just minutes after Scotland ordered a lockdown of its own, the UK’s ITV reports that BoJo plans to impose “Tier 4” restrictions everywhere as new cases near 60K cases/day.  Most importantly, BoJo is expected to announce mandatory closures for schools across the country, a sign that the PM is abandoning his insistence that in-person education be prioritized.

PM will be directly addressing the nation. It won’t be a press conference. Tier 4 restrictions will be imposed everywhere. Schools closed. No more team games in parks. But outdoor exercise will still be allowed. https://t.co/dhKbH2lkgC

PM is addressing nation at 8 tonight. Parliament to be recalled Wednesday. Tough national lockdown to be announced

The BBC meanwhile reports that BoJo is planning to roll out new “Tier 5” restrictions, offering a glimpse of reality to what has become an inside joke among lockdown opponents in the UK.

In Scotland, the lockdown that will go into effect at midnight will last for a month, and first minister Nicola Sturgeon has said it will be comparable to the springtime lockdown. She added that roughly half of new cases in Scotland are being attributed to the new hyperinfectious variant.

By now, it should go without saying that the super-infectious COVID-19 “mutation” first discovered in the UK has helped to inspire the new restrictions.

The new measures come as the UK starts vaccinating the most vulnerable patients with the AstraZeneca-Oxford vaccine. 82-year-old retired maintenance manager Brian Pinker was injected with the first dose of the vaccine at a hospital in Oxford, where he is a dialysis patient.

Three weeks have passed since the US approved the Pfizer-BioNTech COVID-19 vaccine for emergency use, and on Monday, the health-care workers who received the vaccine during the first day of the rollout are scheduled to receive their second dose – even as OWS head Moncef Slaoui floats the possibility to stretch the supply of the Moderna vaccine by dividing each dose in half (trial data suggests a small group of patients who accidentally received a half-dose of the vaccine during the first jab actually saw higher efficacy rates).

Three weeks ago, the first #covid19 vaccines were administered in the US. A number of health-care workers are expected to get their 2nd shot today. The initial rollout is behind schedule, but experts suggest we’ll see the pace pick up this month: https://t.co/624M7IPaMz

Then again, the slower-than-expected rollout of the coronavirus vaccine in the US isn’t due to a dearth of supplies: For whatever reason, many US states have struggled in dispensing the vaccines – in some cases, because health-care workers and others who are first in line for the vaccine are refusing to take it. Meanwhile, in Israel, the country with the highest vaccination rate relative to its population, hundreds of patients were sickened after receiving their first dose. A California nurse in San Diego 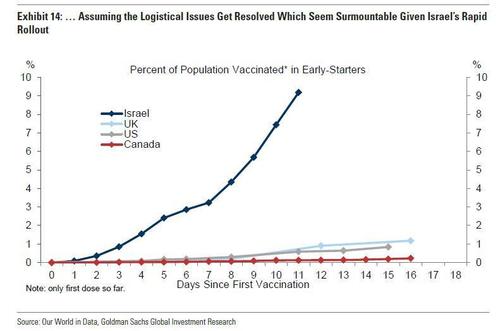 As the vaccine rollout lags targets set around the world, governments in the UK and US are exploring decidedly incompatible strategies for alleviating the issue. In the UK, authorities have decided to delay the second round of shots in favor of trying to vaccinate as many people as possible during the first round of shots. Even as their colleagues in the US dismiss this strategy as wrong-headed. Dr. Anthony Fauci told CNN late last week that he “would not be in favor of doing that…we’re going to keep doing what we’re doing. 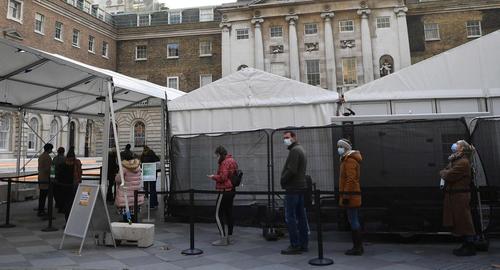 Having approved the first jabs for emergency use more than a week before the US, the UK is already ahead of its rivals when it comes to the number of people being vaccinated. And now that the UK has become the first country to approve the Astrazeneca-Oxford jab, millions of doses of that vaccine have already been shipped.

On Monday morning, former FDA Director Dr. Scott Gottlieb appeared on CNBC to reassure the public that there’s no need to stockpile doses of the vaccines, just before Moderna held a press briefing on Monday morning to publicly raise its year-end target for the number of vaccines that will be rolled out this year.

In the US, the number of new cases reported Monday topped 200K again as delays in reporting figures started to alleviate. The official number for the last 24 hours was closer to 300K, but nearly 1/3rd of those cases were delayed reports from over the holiday. Deaths, however, dipped back below 2K. 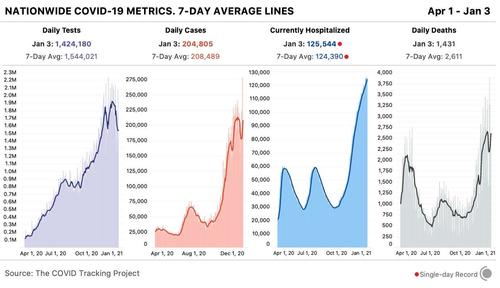 As the number of confirmed COVID-19 cases tops 85MM, here’s some more COVID-19 news from overnight and Monday morning.

Following reports over the weekend about looming lockdowns in Europe, Scotland’s leaders have just announced new lockdown measures that will take effect at midnight Tuesday morning. They said the restrictions will be similar to the March lockdown, with everything from retailers to gyms to spas to cinemas set to be closed. Meanwhile, UK PM Boris Johnson is expected to announce an expansion of Tier 4 restrictions during an address to the nation at 2000 local time.