New research published Monday suggested that AstraZeneca’s COVID jab, developed in partnership with Oxford, is even less effective than we believed. We previewed the data over the weekend, and now millions are worried that the EU might be planning to use this to extend their lockdowns, while scientists continue to slam Brussels for its perceived slowness in rolling out the jabs.

We haven’t heard much about COVID-19 treatments in a while, which isn’t surprising, considering that the last COVID treatment that appeared to show any kind of promise was remdesivir, which – as we later learned – was mostly ineffective, despite all that trial data.

Well, on Monday, local press in Israel published a report claiming that a new treatment, tested on a small number of patients, cured some 97% of them.

In China, officials reported no locally transmitted cases for the first time in nearly two months on Monday, while the number of cases rose slightly to 14 on Feb. 7, up from 12 a day earlier. All were infections “attributed to” overseas; 7 of the cases were in Shanghai, the rest in southeastern Guangdong Province. South Korea also reported a notable pullback, with the lowest number of new  daily cases since late November, while the government has eased social distancing restrictions in the face of growing criticism from the business community.

…while the number of new deaths declined day over day once again, reaching the lowest daily level since the final week of 2020.

As concerns about the efficacy of some western vaccines rise, Oxford issued another statement reminding the British public that the jab is effective against the UK mutant strain, known as B117.

That should come as modest relief to Britons as the UK finally catches up to Israel, making it the major country with the largest percentage of its population to have been 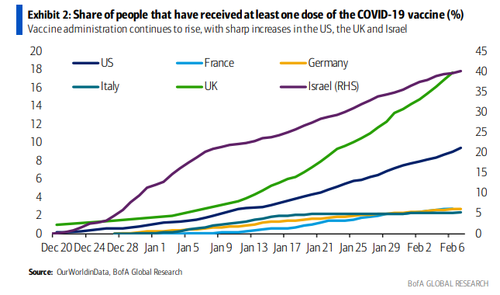 In the US, meanwhile, the trends of falling cases and hospitalizations have been joined by falling deaths.

In other news, Dr. Fauci warned Americans not to delay their second does of the coronavirus vaccine after other health experts suggested recently there may be a benefit to delaying the second dose, allowing more people to earlier their first jab earlier.

Here’s some more news from overnight and Monday morning;

Finally, as far as worries about declining vaccine efficacy go, new data show the B117 variant is 35-40% more transmissible, according to a recent study, and “will likely become the dominant variant in many US. states by March, 2021, leading to further surges of Covid-19 in the country, unless urgent mitigation efforts are immediately implemented.” All of this points to the possibility that COVID’s continuing evolution could make it impossible to truly extinguish it.

Who Really Imperils the Republic?