US Services Surveys Soar Amid Inflationary Surge In Costs

After a mixed bag on the manufacturing side of the US economy (ISM down, PMI up), Markit and ISM report their Services sector surveys today and were expected to both show declines. However, both Services surveys beat expectations. 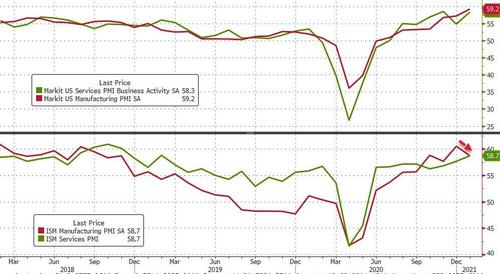 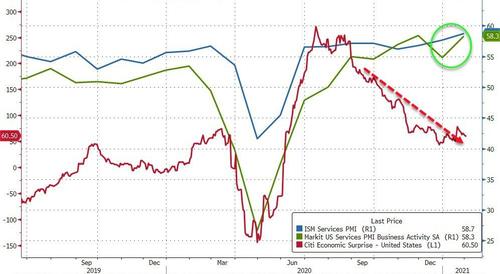 Despite a faster rise in new business, a number of firms reported sufficient capacity to process incoming new work in January.

As a result, companies increased workforce numbers only marginally, and at the slowest pace since July 2020.

The IHS Markit Composite PMI Output Index posted 58.7 in January, up from 55.3 in December, to signal the quickest rise in private sector business activity since March 2015, and the best PMI in the world’s major economies for now (as the rest of the world slows). 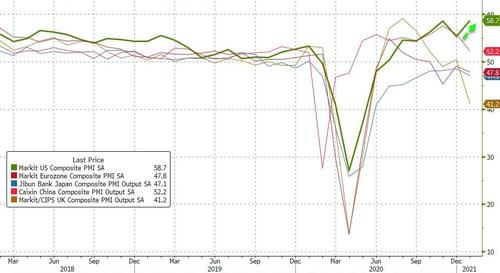 “A strong start to the year for manufacturing was accompanied by a marked upturn in the service sector, driving business activity growth to the fastest rate for almost six years during January. The improving data set the scene for a strong first quarter, and a rise in business expectations for the year ahead bodes well for the recovery to gain traction as the year proceeds. Companies have become increasingly upbeat amid news of vaccine roll-outs and hopes of further stimulus.

The downside is that prices have risen sharply.

As a result, private sector output charges increased significantly at the start of 2021.