Authored by Jan Nieuwenhuijs via The Gold Observer substack,

For the first time ever the total value of the U.S. equity market is worth twice as much as the real economy. A true financial bubble. Previous highs of the equity to GDP ratio were followed by significant gains in the price of gold. This time around I expect the gold price to rise as well. 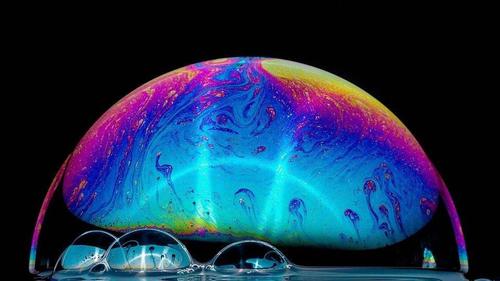 A Brief Overview of the Past 100 Years

In the beginning of the 20th century the U.S. was still on a gold standard. When the stock market crashed in 1929 the Great Depression and deflation ensued. In 1933 President Roosevelt devalued the dollar against gold to spur inflation and stimulate the economy. The gold price was increased from $20.67 to $35 dollars per troy ounce (see “#1” in the chart below). Internally the U.S. abandoned the gold standard in 1933, but externally the dollar remained convertible for gold at the Treasury against a fixed parity. 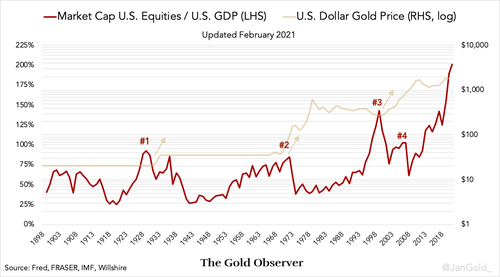 This changed in 1971 when President Nixon suspended convertibility, enabling the U.S. to print any amount of dollars it saw fit. Soon after, double digit consumer price inflation kicked in and the gold price skyrocketed from $41 dollars in 1971 to $850 dollars in 1980, up 2,000% (see “#2” in chart 1). To combat inflation the Federal Reserve increased its target interest rate to 19%. The Fed’s policy worked: inflation declined and the gold price fell back to roughly $300 dollars.

When the dot.com bubble in the late 1990s popped, the Federal Reserve lowered interest rates to 1%. Low interest rates boosted financial assets and caused inflation to trend upwards. The gold price began its march from $270 dollars in 2000 to $1,900 dollars in 2011, up 640% (see “#3” in chart 1). Along the way the gold price was supported by the subprime mortgage crisis in 2008 (see “#4” in chart 1). After 2008 the Federal Reserve unleashed unconventional monetary policy. The Fed lowered short-term interest rates to 0% and started printing unprecedented amounts of money to buy bonds and mortgage-backed securities to lower long-term interest rates. Ever easier money has fueled stock (and bond) markets to extraordinary highs. In chart 2 you can see that stock prices have totally detached from corporate earnings. 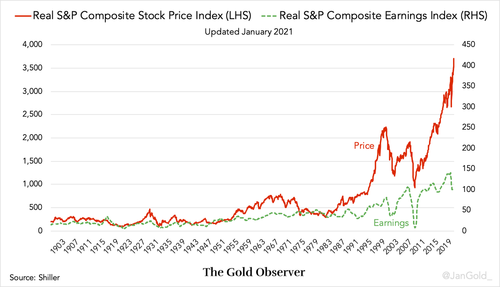 One can argue that the real price of gold (corrected for inflation) is currently not undervalued. As I have written in a previous article gold’s purchasing power is fairly constant. Today, gold buys you roughly the same amount of commodities and goods and services as it did 50, 100 or 200 years ago.

Fiat is in a bubble.

However, according to my analysis, fiat money is strongly overvalued. As, fiat is the air for the present financial bubbles – fiat facilitates the excessive leverage in the economy. When the bubbles eventually burst, fiat’s value will be corrected (inflation goes up), and the gold price denominated in fiat rises.

In forthcoming articles we will have a look at the value of global financial assets relative to GDP, to assess the magnitude of the prevailing bubble in the financial stock (money, equity and bonds) around the world.

If you enjoyed reading this article please consider to support The Gold Observer and subscribe to the newsletter.