After the FDA’s advisory panel confirmed yesterday that the benefits of approving Moderna’s COVID-19 vaccine outweigh the risks, we now await the ‘green light’ from the agency itself, which should arrive either today or tomorrow.

Meanwhile, a small number of disturbing reactions have stoked reservations among health care workers who are slated to be the first to receive the vaccine, but find themselves anxious about becoming “guinea pigs”. The CDC has promised that jabs would be given in prearranged waves to prevent entire nursing floors from being overwhelmed by the side effects. But fears about production delays are also starting to mount. 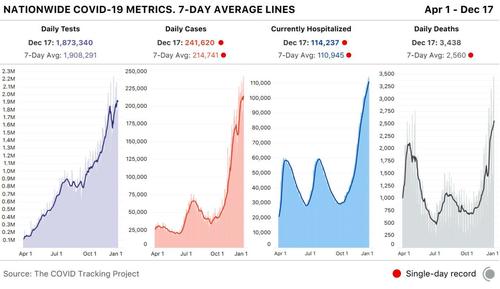 Moving on to the latest COVID data, hospitalizations are trending higher in every region but the Midwest. 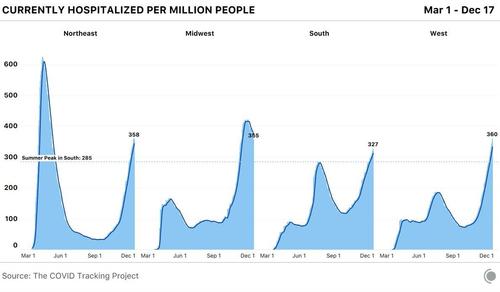 Across the US, the number of deaths since the start of December has put the month on track to challenge April as the deadliest month since the pandemic started. 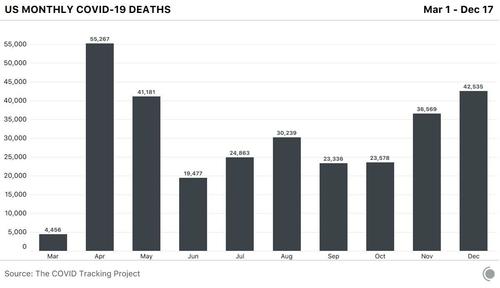 Globally, the number of cases passed 75MM while deaths topped 1.7MM. Another interesting fact: During the past week alone, nearly 1 out of 200 Americans was diagnosed with the coronavirus – an astronomically large portion of the population to be sick at the same time.

As the race for supplies of vaccines continues, Bloomberg is trying to track the number of doses doses administered so far. As of Friday morning, more than 1.1MM people in four countries had received the vaccine. 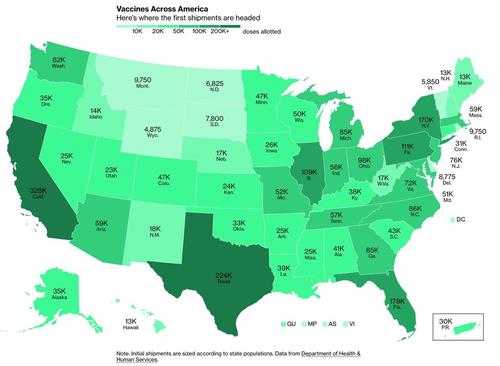 It’s possible that Europe will approve shots from AstraZeneca or CureVac, or perhaps both, during the coming month or two, which could immediately boost Germany’s capacity to inoculate, according to Jens Spahn, who spoke during a press conference Friday.

As of Friday morning, more than 1.1MM people in four countries had received the vaccine.

In the US, 24 states have reported just under 50K doses that have been administered to health care workers, as the map above shows.

Speaking of vaccinations, VP Mike Pence received his first COVID-19 dose live on television Friday, seeking to shore up public support for vaccinations as US deaths topped 3K once again.

VP Mike Pence was vaccinated for COVID-19 on Friday in a live-television event aimed at reassuring Americans the vaccine is safe. Check it out >> https://t.co/7xoAMHN8BM pic.twitter.com/QufaACUIbn

Then again, reports from weeks ago claimed that China has already administered 1MM doses had already been administered to health-care workers and others under an “emergency”  basis.

The EU is moving to double its order of Moderna-produced vaccine doses, while Pfizer is fending off reports of more supply disruptions, something we have repeatedly warned about as the biggest risk to the  “Operation Warp Speed” target.

As we await more data on the pace of vaccinations from China and elsewhere, Nikkei reports that China is planning to vaccinate 50MM people in high-priority groups against the coronavirus before the peak Lunar New Year travel season begins early next year. Readers might remember the LNY travel season as the original catalyst that spread COVID-19 around the world. Beijing is planning to distribute 100MM doses made by Chinese companies Sinopharm and Sinovac Biotech.