Two weeks ago, on Feb 16, when discussing the persistently high and sticky level in the spot VIX, we referenced a recent report from Goldman according to which retail investors were flooding into long VIX ETP and calls, creating an upside “vega vacuum“…

… perhaps in anticipation of another VIX spike, perhaps in a (misguided) attempt to spark a VIX short squeeze (as Morgan Stanley previously speculated), but whatever the reason, last week’s VIX surge was enough to hand retail investors sufficient profits with the fear index surging by 50% since our initial post on the topic.

Why is this notable? Because as Charlie McElligott writes this morning, the “enormous decrease” in daily VIX ETN “Net Vega” which we addressed two weeks ago, and which declined by a whopping $38.1mm as some of that recent enormous “long Vega” accumulation is monetized (thanks to the VIX surge), now serves as a “potential source of easing some of the stickiness in  persistently-higher implied vol” (i.e., VIX, etc) which then becomes a “feed-back loop” into softening of realized vol yet again. 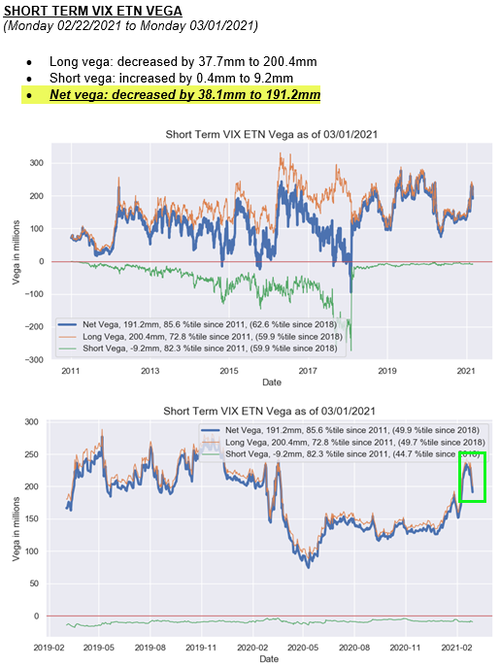 It is the vaporization of this “vega vaccum” that we saw yesterday as the VIX tumbled that was the key driver behind the market stabilization. There is more.

As Nomura’s Charlie McElligott adds, with Spooz currently sitting ~ 3895, between the two massive Gamma strikes of 3900 ($3.6B) and 3850 ($2.5B)— the critical observation is that after being short for a few days, dealers are now long Gamma vs spot (Gamma neutral line at 3790) and are helping to insulate against large market swings, while option holders are again long Delta vs spot, (the Delta neutral line at 3819).

Yet in a curious divergence, the duration-sensitive Nasdaq/QQQ continues to sit at the root of much of the market “jumpiness,” where as opposed to SPX/SPY options positioning,  Dealers remain incrementally “short Gamma” vs spot (Gamma neutral line at $323.91 in QQQ), and options “short Delta vs spot” as well (neutral line at $326.25), leaving markets especially susceptible to more bond-market tremor if the Rates selloff were to reacclerate / further re-price Fed path. 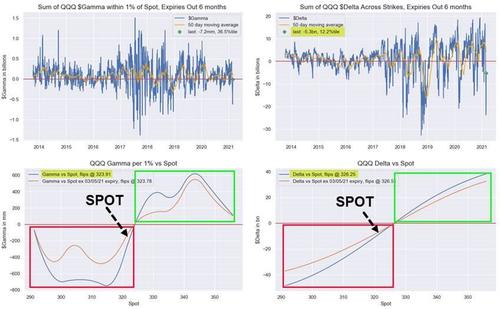 Yet while short dealer gamma in Nasdaq is a potential source of risk, what is far more important is that SPY gamma is now positive.

It is this double whammy of i) positive gamma and ii) collapsing vega then that according to McElligott explains the meltup in risk assets in the past 48 hours. Some more details:

And this is why, McElligott writes, “yesterday was an “everything up” day with “Low Risk” again hammered, particularly positive for both legs of his recommended “65% Renormalization, 35% Fed Liquidity Beneficiaries” basket structure advocated for 2021… but also evidenced bullish moves in Macro factor pairs following the monster ISM Manu print, with “Nomura 10-Yr Yield Sensitives” +2.4% on day and now +31.7% YTD. 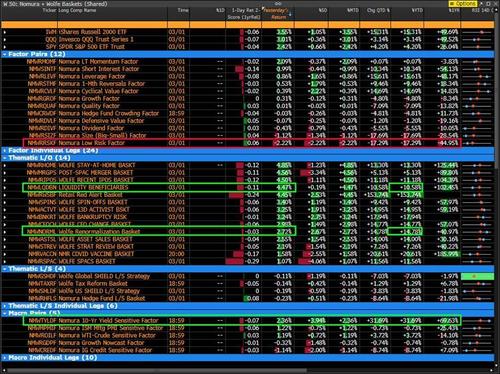 Peter Schiff: We’re On Autopilot Down The Road Toward Inflation