Virtu Financial has become the latest in a long line of companies leaving New York for Florida.

It’s a trend that started early this year when we first reported that Citadel had set up a makeshift trading floor at the Four Seasons in Palm Beach. Back then, the thought process was to get out of crowded areas due to unknowns about the pandemic.

As the year has progressed, companies and executives have continued to leave places like California and New York (and their liberal political leaders) in favor of lower taxes and less regulation in places like Texas and Florida. Companies like Elliot Management and Goldman Sachs have also moved some offices to Florida.

Virtu is the latest to follow suit, according to Bloomberg. It’ll be moving about 30 people to Palm Beach Gardens and is closing in on signing a 10 year lease. By the end of this year the firm expects total employees in Florida to rise to 50 people, about 10% of their workforce. The Palm Beach location is set to become a “full-fledged base” for the company, the report says. Employees who transfer will effectively get an 11% bump in pay due to Florida having no income tax.

Chief Executive Officer Doug Cifu commented: “We are dramatically oversubscribed for people who want to relocate from the tri-state area. We surveyed our employees, and the No. 1 concern that people had was quality of life — but also taking mass transit to New York City any time in the foreseeable future.” 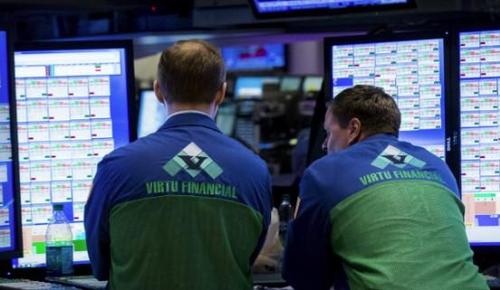 “I was always a non-work-from-home, people-gotta-be-in-the-office, trading-room kind of guy. But I don’t think it’s practical given the modern world and where people want to live their lives and where people are happiest,” he continued.

The regulatory environment will likely help bolster what has already been a record year for the company, which doubled its net trading income to $1.82 billion through the third quarter.

The company will shrink its footprint in Manhattan by 75% and will sublet its offices while looking for a “smaller, cheaper” location. Cifu says the changes were spurred by working from home, but again – the regulatory environment – and New York’s consistent promise of higher taxes – likely played into the decision making, as well. It also helps that Cifu owns part of the Florida Panthers hockey team.

He says he is fed up driving from New Jersey to Manhattan and spending 12 to 14 hours away from home each day. He says in Florida, his commute will be much shorter: “I would probably leave my house at 7:30 and I would be in the office by 7:36. On a good day, I’d probably leave at 4:30 — see the markets close. In the spring and the fall, for sure I’ll get 18 holes in.”

“Why am I forcing 400-odd people to schlep to lower Manhattan? I hate it, and I’m the CEO — I don’t have a boss, I don’t have to be there on time. Can you imagine the other 399 people? They must hate it much worse than I do,” Cifu concluded. “Doing business in Florida is more inviting and more welcoming. There are parts of the political class in New York and New Jersey that just don’t value the jobs and the industry.”

Conservatives Should Learn From The Left