Visualizing The US Population By Race

The American population is a unique mosaic of cultures – and almost 40% of people identify as racial or ethnic minorities today.

In this treemap, Visual Capitalist’s Iman Ghosh uses data for 2019 from the Kaiser Family Foundation, which bases its analysis on the latest American Community Survey (ACS) data from the U.S. Census Bureau. 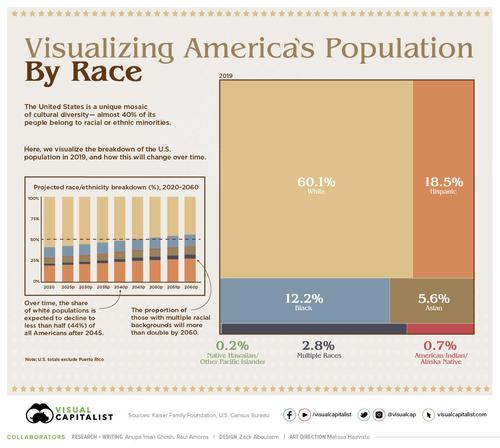 Then we break down the same data on a state-by-state basis. 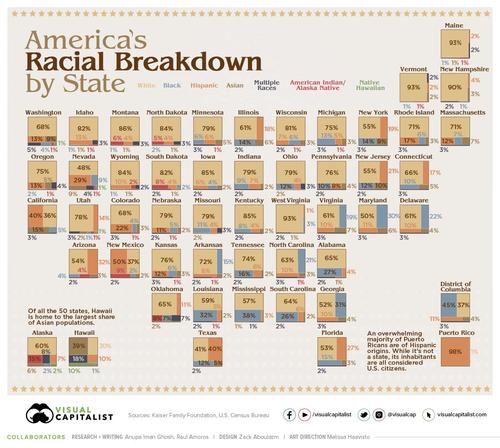 As of 2019, here is the current distribution of the U.S. population by race:

*Note that the U.S. totals do not include Puerto Rico.

However, these race and ethnicity projections are expected to change over the coming years. By the year 2060, it’s expected that the distribution of Whites as a percentage of total population will fall from 60.1% to 44.3% of Americans.

Interestingly, the proportion of those from multiple racial and ethnic backgrounds will more than double, from 2.3% to 4.9% alongside rising patterns of interracial marriage.

Over time, the U.S. Census has been vastly expanded to reflect the true diversity that the country holds. In fact, it was only from 1960 onwards that people could select their own race—and only from 2020 can those who chose White or Black provide further information on their roots.

Of course, racial diversity in the United States differs widely from region to region.

In the Northeast—particularly the states Maine, Vermont, and New Hampshire—the White population accounts for 90% or more of the total. In contrast, Black populations are highest in the District of Columbia (45%) and several Southern states. 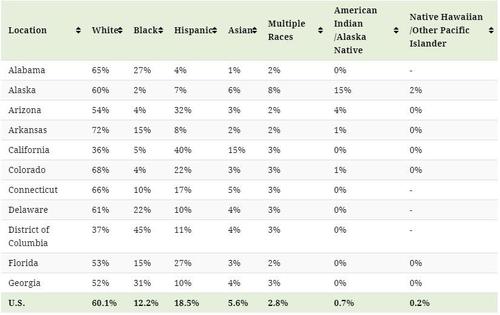 Note: A dash (-) indicates estimates with relative standard errors greater than 30%, which were not included in the data

Of all the 50 states, Hawaii is home to the largest share of Asian populations at 39%. It also has one of the most diverse racial breakdowns in the nation overall, including the highest proportion of mixed race individuals.

Looking to another island, an overwhelming majority (98%) of Puerto Ricans are of Hispanic origins. While it’s not a state, its inhabitants are all considered U.S. citizens.

Charting the U.S. population by race is crucial for a number of reasons. This information can be used to better understand existing income and wealth gaps, track public health outcomes, and to aid in policy decision-making at higher levels.