On Monday, the VIX explosion unleashed a powerful move for protection, soaring to as high as $31.46, having been range-bound between $26-$20 for much of November and December. The cause was primarily due to a virus mutation in the UK, raising concern that the central assumption of exceptional economic growth next year could turn out wrong. 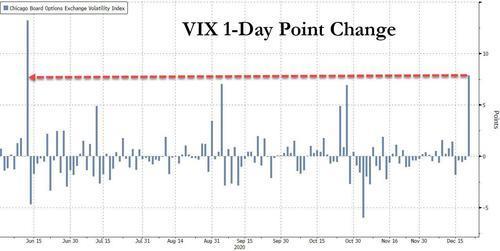 IFR News points out a “kink” in the VIX futures curve for February.

“There is almost a kink on the VIX futures curve for February with the curve between February and July a saucer shape that is flat.”

The VIX curve suggests a period of elevated caution in financial markets “over the coming days with more Brexit/Covid headlines,” IFR said.

“The caution in the VIX curve is understandable given a bias to play volatilities from the short side (expectations that theu will be back in the teens), as well as worries that this could be the start of a more prolonged unwind of longs.”

“This was a risk yesterday that the bullish consensus view for 2021 would be repriced. But the reports that the vaccine was effective against the new Covid strain has helped to keep the 2021 consensus in play. We reiterate a point we made in our comment last week that “Given that the outlook is so closely linked to the health crisis, it is not surprising that the risks to the outlook are also a function of the outlook for the virus”.”

IFR outlines the latest concerns that have brought volatility back into financial markets:

“The VIX curve is rightly pricing caution and so the price action suggests another run at fresh highs on the S&P500 in early January. The equity rally is still unlikely to impact much on bond markets as ECB/Fed purchases along with appetite for safe assets will continue to keep a lid on yields.” 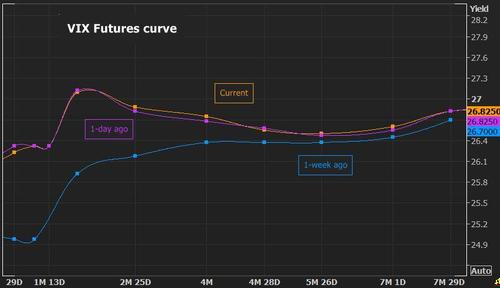 Expanding on IFR, the VIX curve bump may also be based on the Jan. 5 Georgia Senate run-off election.

Here’s BMO’s senior Economist Sal Guatieri’s take on what a Democrat sweep in Georgia would mean:

“A Democrat sweep of the two Senate runoff seats on January 5 would also usher in more fiscal stimulus and a wave of new spending on infrastructure, education, housing, child care and the environment, with some offset from higher corporate income taxes and tighter regulations. The only certainty about the coming year is that it won’t be boring—though we could stand for much less excitement than the past year.”

While it is clear concerns are coming back into financial markets, Bank of America recently issued its first “sell signal” since February 2020.