The WallStreetBets Reddit forum that skyrocketed in popularity this year amidst the GameStop chaos is now targeting crypto miners.

Though the board has a “no cryptocurrency” rule, that doesn’t prevent users from talking about stocks that are tied to cryptocurrency. And that’s exactly what they’re doing, according to Bloomberg. Names like Riot Blockchain (RIOT) and Marathon Digital Holdings (MARA) have become mainstays of conversation on the board.

Perhaps lost amidst the bitcoin bluster is the fact that mining names have returned massive sums, in excess that of bitcoin. Marathon and Riot both surpassed 7,600% gains for the year as of March 12. 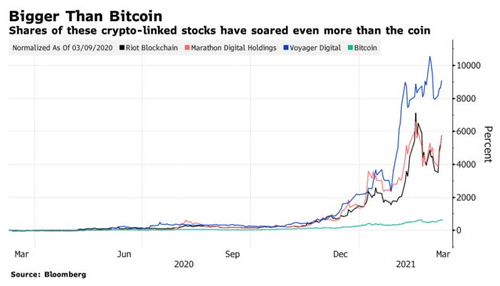 Users of the forum have been taking exception with the “no cryptocurrency” rule: “Oh, we can talk about RIOT now? Nice, I guess I can show this 16-bagger,” one post said. And while the forum isn’t responsible for the names taking off – they have followed bitcoin’s surge – it may begin contributing to still-growing interest in the names.

Cryptos, at the same time, look as though they will continue going mainstream. Coinbase’s upcoming NASDAQ listing will value it at about $90 billion.

But at some point, laws of large numbers will kick in. Howard Wang, co-founder of New York-based investment advisory and market research firm Convoy Investments, told Bloomberg: “Investors should consider whether the business model is sustainable in an environment where Bitcoin prices aren’t quadrupling year over year. Bitcoin and miners are fundamentally different investments.”

And obviously, layering a management team and a company on top of bitcoin, adds additional risk to the already ever-present risk of investing in bitcoin. Vijay Ayyar, head of Asia Pacific with crypto exchange Luno in Singapore said: “It’s quite hard to do better than just holding Bitcoin itself, frankly. Owning an asset versus the business that produces that asset are quite different both from a cost and opportunity perspective.” 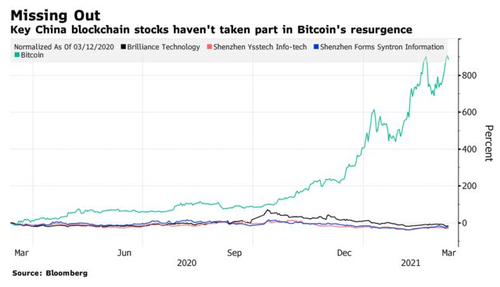 The report sites gold miners, down 40% over the last decade while gold was up 20%, as an example of this type of risk.

Furthermore, bitcoin mining becomes a more expensive and energy consuming business as time progresses. Places like China’s Inner Mongolia autonomous region have already banned the mining of crypto because of its drag on energy. Chinese bitcoin miners like Shenzhen Forms Syntron Information Co., Shenzhen Ysstech Info-Tech Co. and Brilliance Technology Co. have not shared in the run up, with the group collectively down 12% so far this year.

Do It For The Kids: A Student Loan Solution