Despite beating across most metrics, including blowout revenue and comp store sales, Walmart shares tumbled 5% in premarket trading after reporting Q4 earnings which missed on earnings, but more concerning to investors was that just as the company resumed guidance, it did so by forecasting a decline in EPS and a slowdown in sales and profit for the full year, while expecting additional spending on automation, technology and worker salaries as Walmart pledged to raise salaries to an average (not minimum) of more than $15 per hour, up from a current average of more than $14 per hour.

First, a breakdown of the company’s just concluded fourth quarter: 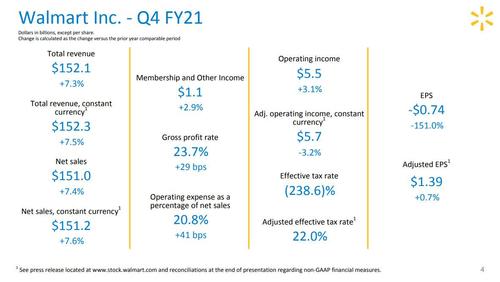 As in previous quarters, the jump in comp store sales was as a result of a sharp bounce in average tickets, which rose 21.9% in Q4, even as comparable transactions declined by 10.9%. 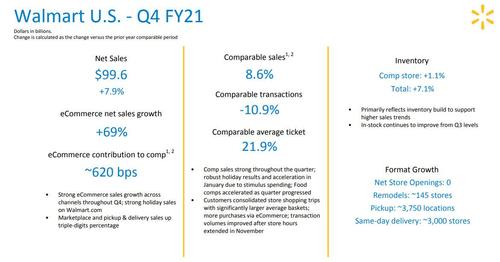 But while recent data was generally solid, small EPS miss notwithstanding, it was the company’s guidance that really spooked traders. 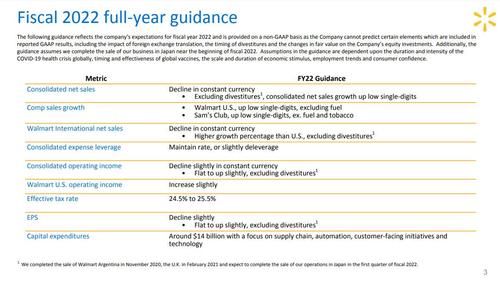 The company said that its net sales, operating income, and EPS are all expected to decline in FY22 primarily due to the impact of anticipated divestitures, (excluding the effect of divestitures, net sales are expected to grow low single-digits with operating income and EPS expected to be flat to up slightly) and although U.S. comp sales will stay positive this year, they’ll rise in the low-single-digits, below the recent breakneck rate but on pace with estimates: Walmart now sees full year Walmart U.S. comp sales ex-gas up low single-digits and Sam’s Club comp sales ex-gas up low single-digits. The company also said fiscal year 2022 capital investments are expected to be nearly $14 billion to build supply chain capacity and automation to stay ahead of demand, improve the customer experience and increase productivity.

Another area of concern was highlighted by Stephanie Wissink of Jefferies who said some key areas like gross margins fell short of expectations, as Covid-related costs “increased significantly.” She also said the full-year guidance was “muted” which is analyst-speak for “we hoped for better.” 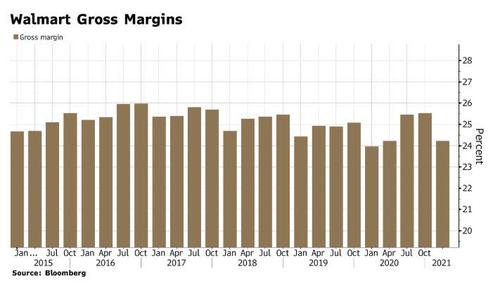 In short, as Bloomberg put it, “after an unprecedented year marked by shortages of staples like toilet paper, surging web traffic and constant shifts in demand from quarantined consumers, Walmart expects a return to more normal business patterns in 2021. But it won’t be business as usual as the retailer is pushing into new areas like advertising and web marketplaces, looking to capitalize on the connections it already has with shoppers. Those moves, along with the wage increase, will cost money though, and there’s no guarantee they will all pan out.”

And speaking of rising wages, Walmart pledged to raise wages to an average of more than $15 per hour, up from a current average of more than $14 per hour. About 425,000 employees out of roughly 1.5 million total in U.S. are slated for increases, mostly in roles that support its digital and stocking operations, US CEO John Furner said in a separate memo to workers Thursday.

The move comes amid calls from President Joe Biden to gradually increase the federal minimum wage to $15 per hour. Chief Executive Officer Doug McMillon recently said Walmart opposes a universal wage of $15 as increases should reflect regional norms, and this move – an average starting rate, not a minimum one – means some workers will still be below that $15 threshold. New starting rates are moving to between $13 and $19 per hour.

“We completed a strong year and a strong Q4 thanks to our amazing associates. They stepped up to serve our customers and members exceptionally well during a busy holiday period in the midst of a pandemic,” said Walmart President and CEO, Doug McMillon. “Change in retail accelerated in 2020. The capabilities we’ve built in previous years put us ahead, and we’re going to stay ahead. Our business is strong, and we’re making it even stronger with targeted investments to accelerate growth, including raises for 425,000 associates in frontline roles driving the customer experience.”

“Walmart’s last investment in associate pay led to better in-store execution as turnover dropped and customer service improved. This in turn helped support some of the same-store sales growth seen after the last pay rise. We expect to see some similar effects as this latest increase kicks in. Walmart’s actions influence broader retail, and as pay increases, typically spending increases as well, which could indirectly aid Walmart as well.”

The market was not convinced, since this isn’t the first time investors voted with their feet in response to news that Walmart has boosted wages. In 2015, shares plummeted when McMillon decided to raise starting wages to at least $10 an hour.

But wait, there’s more because in addition to higher wages, Walmart said it will also invest about $14 billion in capex on things like “supply chain, automation, customer-facing initiatives and technology”, up from the $10.3 billion it spent on capital expenditures in the year that just ended. Those kind of investments will help it expand in retail’s growth areas like microfulfillment of groceries and better digital experiences for customers. That’s increasingly important as Walmart’s U.S. e-commerce sales grew 79% in the year, and while that sounds like a lot, it is actually a third quarter of growth declines. 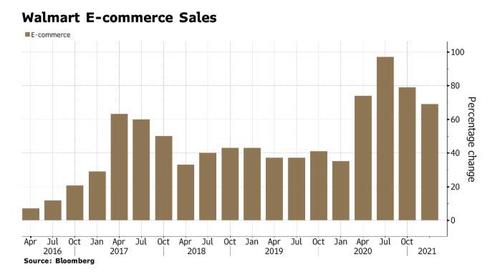 As a result of the soggy guidance and projected boost in spending, not even the company’s decision to boost its dividend and to unveil a new $20 billion stock buyback was enough to prevent a sharp drop in WMT shares: 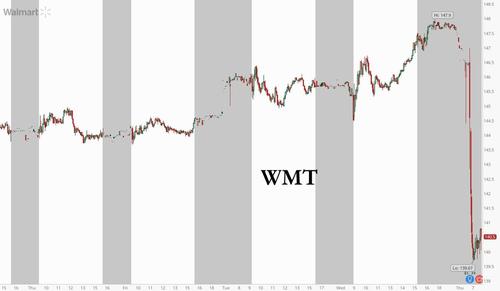 With WMT now holding its conference call, investors will be eager to hear more about new areas of growth and whether businesses like digital advertising, health care and web marketplaces deliver wider margins than Walmart’s core retail business. Analysts will also be listening for details on the profitability of the U.S. e-commerce business, which has narrowed its losses but still doesn’t make money.

What Are The Next Steps For US Fiscal Policy: A Goldman Q&A