Warren’s Wealth Tax: How A New Bill Would Convert The Tax Code Into A Canned Hunt

Below is my column in the Hill on introduction of Elizabeth Warren’s wealth tax.  The bill contains two notable addition: a massive increase in the size of the IRS and what I call a “captivity tax” to try to keep the wealthy from fleeing. The odds are that Democratic leadership will see some of the same problems with this bill, but the danger is that such legislation will be difficult to oppose due to its public appeal. Moreover, there is a lack of honestly about the constitutional and practical issues surrounding a “wealth tax.” Such details are lost as Warren pledges to go after the “Rembrandts … diamonds and … yachts”  of the wealthy. 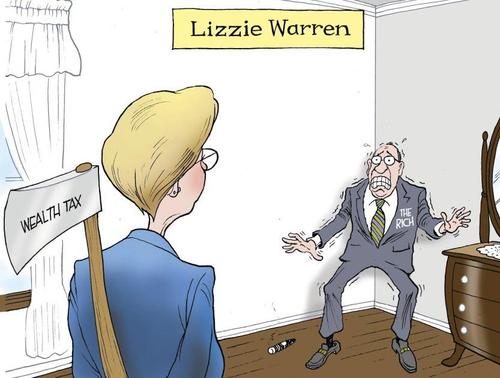 For the purveyors of identity politics, there is no surer bet than leading the masses against the “super rich.” Since philosopher Jean Jacques Rousseau spoke of “eating the rich” before the start of the Reign of Terror, politicians have had an insatiable appetite for class warfare politics.

In her “wealth tax” legislation, Senator Elizabeth Warren insists she is merely nibbling on the rich but still can seize $3 trillion over the next decade, a figure challenged even by one Biden administration economist. Warren has also included an “exit tax” to stop the rich from fleeing. Not surprisingly, it is wildly popular outside of super rich circles. It also is arguably unconstitutional and manifestly impractical. Yet, in Washington, bad policy often makes for good politics.

The difference between the federal and state proposals is that express language of the Constitution would seem to bar a wealth tax. Article One permits Congress to “lay and collect taxes, duties, imposts and excises.” However, it requires that these “be uniform throughout the United States.” The next section says “no capitation or other direct tax shall be laid, unless in proportion to the census or enumeration herein before directed to be taken.”

A wealth tax is a “direct tax.” While James Madison and Alexander Hamilton disagreed on the constitutionality of such a tax, they agreed a direct tax under the Constitution would include a wealth tax. Hamilton agreed with Madison that a direct tax could be a tax “on the whole property of individuals or on their whole real or personal estate.”

There are good faith arguments that a wealth tax would be constitutional, and there are cases on both sides of that issue. Estate taxes and other forms of taxation can be cited to challenge the bright-line meaning of these terms. However, the problem does not end with Article One. When the 16th Amendment was ratified, it allowed for federal income taxes, and only income taxes: “The Congress shall have power to lay and collect taxes on incomes, from whatever source derived, without apportionment among the several States, and without regard to any census or enumeration.”

Putting aside the dubious constitutionality of Warren’s tax, there are even greater practicality problems. Valuing wealth from real estate to luxury items would require a massive increase in the Internal Revenue Service and a huge increase in reporting responsibilities. Warren seems to acknowledge how much of a bureaucratic increase is needed: The bill mandates a breathtaking $100 billion increase in IRS funding over the next ten years.

Even with a massive increase for 2021, the IRS annual budget is just over a tenth of that figure, at $11.92 billion. Warren also seeks to mandate a greater number of annual audits for this engorged IRS to conduct: Each year, one third of those covered would be audited, on everything from cars to art. Such calculations would require establishing not just their purchase price but their current market value.

Then there is the practical problem that billionaires are mobile — not fixed — tax sources. Put simply, they can leave. That is what happened in other countries pursuing a wealth tax, which found the practical enforcement of such taxes was more difficult than assumed. France lost 12,000 millionaires per year and later reversed course with tax cuts, to try to lure back the wealthy. Only a handful of countries are still trying to make such taxes work.

Warren believes she has a solution to that, too. It is another tax, of course. Call it a “captivity tax.” If you decide you do not want to be the subject of what liberal tax expert Josh Bivens calls the “very big experiment,” Warren threatens to hit you with a confiscatory tax of 40 percent of your net worth (above $50 million). Thus, if you accumulated stuff worth $500 million, Warren would make you leave more than $180 million as the price to be free of her tax regime — it is pay or pray.

Of course, not only will many consider leaving before such a tax is imposed, but many billionaires are likely to have second thoughts about coming to the United States (and investing here) if they will be captive to the Warren tax like some money mastodon stuck in a tax tar pit. The promise of being audited for everything you own every three years down to your last Cartier watch is not very appealing.

The captivity tax highlights the wealth-redistribution mindset underlying Warren’s “experiment.” Warren thrilled audiences for years by telling the rich she was coming after “your Rembrandts, your stock portfolio, your diamonds and your yachts.” In one Democratic debate, she got applause by rubbing her hands together after saying she would take some of the wealth of fellow candidate John Delaney, a self-made millionaire worth $65 million. She has now made good on that threat.

Warren and most of her colleagues have, of course, not made such fortunes. But where others make wealth, her skill is taking wealth from others, and she believes she has achieved the holy grail of the taxing set: Preventing flight with a captivity tax. She hopes to now pursue Delaney and others for their art and diamonds and they won’t be able to escape, even on their now-fully-audited yachts. It is like a tax version of a canned hunt.

Biden administration officials like Treasury Secretary Janet Yellen recently said they are considering this option and other tax increases to help pay for trillions in new spending. But the problem with a Rousseauian diet is that it is as addictive as it is rich. It relieves politicians of responsibility for uncontrolled spending by fueling a type of class warfare. It all may collapse in court, but that is years — and trillions of dollars — down the road.

Tracking The US Labor Market Recovery

Why Buy Gold When There Is Bitcoin & Tesla?