Washington Demands Hearings On “Manipulation” & “The State Of The Stock Market”

Update (1631 ET): California Democratic Congresswoman Maxine Waters, who is also the chairwoman of the Financial Services Committee, is the latest high-profile lawmaker calling for a hearing into the recent activity surrounding Gamestop.

“Addressing that predatory and manipulative conduct is the responsibility of lawmakers and securities regulators who are charged with protecting investors and ensuring that our capital markets are fair, orderly, and efficient. As a first step in reining in these abusive practices, I will convene a hearing to examine the recent activity around GameStop (GME) stock and other impacted stocks with a focus on short selling, online trading platforms, gamification and their systemic impact on our capital markets and retail investors.

“We must deal with the hedge funds whose unethical conduct directly led to the recent market volatility and we must examine the market in general and how it has been manipulated by hedge funds and their financial partners to benefit themselves while others pay the price.”

A slew of high-profile people have commented on Robinhood’s action this morning on trade restrictions of GME (along with several other companies) – going up the ladder of importance – Democratic Sen. Elizabeth Warren of Massachusetts called for the SEC to do more to deal with “stock market manipulation.” Meanwhile, Democrat, Ohio Senator Sherrod Brown, who is also the chairman of the Senate Banking Committee, demanded a hearing on the “state of the stock market.”

Warren told CNBC, “the bigger issue for me is the SEC’s inability and unwillingness to deal with market manipulation,” adding that “a healthy stock market, you’ve got to have a cop on the beat. That should be the SEC. They need to step up and do their job.”

Of course, she was entirely clueless when asked to describe what “manipulation” took place and further raised questions about who was really behind the moves (although we are pleased she held herself back from claiming it was ‘Russians’).

She released this statement following the recent developments of Robinhood and GameStop.

“With stocks soaring while millions are out of work and struggling to pay bills, it’s not news that the stock market doesn’t reflect our actual economy. For years, the same hedge funds, private equity firms, and wealthy investors dismayed by the GameStop trades have treated the stock market like their own personal casino while everyone else pays the price. It’s long past time for the SEC and other financial regulators to wake up and do their jobs – and with a new administration and Democrats running Congress, I intend to make sure they do.”

And after Warren had explained that the solution was a “2c wealth tax” which would lead to a utopia where “mummies and daddies” could bring up their children with no worries about actually getting or keeping a job (ok, we paraphrased a bit).

“People on Wall Street only care about the rules when they’re the ones getting hurt. American workers have known for years the Wall Street system is broken – they’ve been paying the price. It’s time for SEC and Congress to make the economy work for everyone, not just Wall Street. That’s why, as incoming Chair of the Senate Banking and Housing Committee, I plan to hold a hearing to do that important work,” Brown said in a statement. 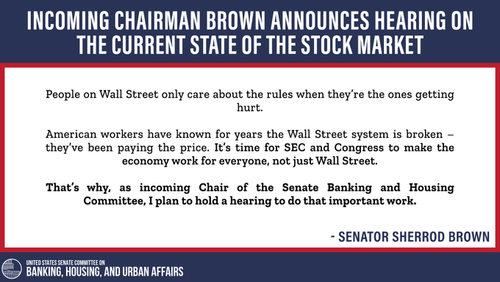 Brown wants to hold a “hearing on the current state of the stock market.”

People on Wall Street only care about the rules when they’re the ones getting hurt.

It’s time for SEC and Congress to make the economy work for everyone.

As Incoming Chairman of the @SenateBanking Committee, I will be holding a hearing on the current state of the stock market. https://t.co/V9Hzp26jRT

We suspect that the real culprit behind all of this will remain behind the curtain – The Fed’s endless easy money and downside protection.

Pelosi earlier said she will be “reviewing” GME.

“Interesting, isn’t it?” said Speaker Nancy Pelosi about the wild ride of GameStop shares. “We’ll all be reviewing it” pic.twitter.com/H8Ev55MDbz

We joked and said:

Grab the popcorn; this is going to get good. Is Washington about to fry Wall Street?