Watch: Fauci Admits There Is No “Science” Behind Continued Lockdown

In a rare moment of truth of CNN Wednesday, Anthony Fauci admitted that there is no scientific reason why people who have had the COVID vaccine are still having their freedoms restricted. 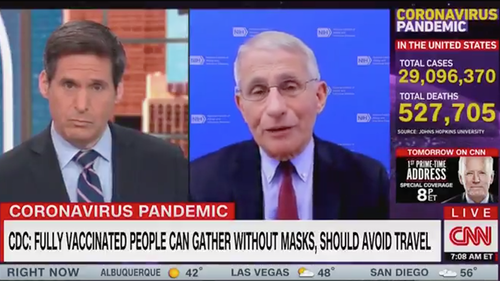 CNN host John Berman asked Fauci “What’s the science behind not saying it’s safe for people who have been vaccinated – received two doses, to travel?”

As we reported this week, CNN announced that the CDC is graciously allowing vaccinated Americans some ‘limited freedoms’, prompting a huge backlash on social media where people pointed out that the health body doesn’t grant anyone their God given freedoms.

The CDC does not give or take my freedom.

So, there is no science and the CDC is making a judgement call about how ‘free’ Americans can be. Hmmm.

“We need data, and science. First we will see what vaccinated people do in their house, then where they travel, go to a store or a haircut.”

Sounds like a centrally planned economy of a socialist state. 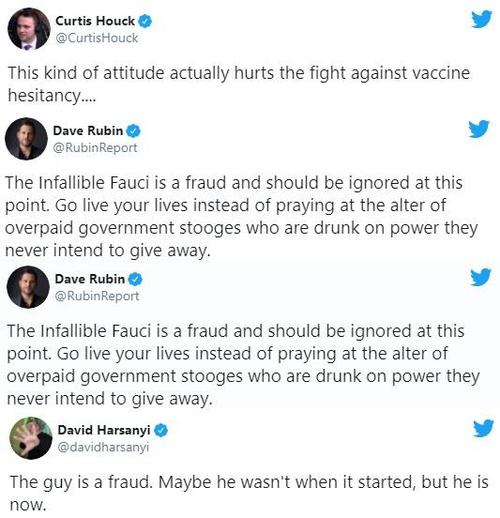 All this comes as a little-remarked new study from the Centers for Disease Control and Prevention, the very epicenter of the pro-lockdown public health establishment, found the positive effects from mask-wearing were decidedly modest in scale.

“Part of the problem for Dr. Fauci,” Stanford University Professor of Medicine Jay Bhattacharya said, “is that he is blind to the harms of the lockdown … He seems not to understand that the lockdown creates all kinds of physical problems, psychological problems, harms that I’ve never seen him talk about.”

New Year’s Week Storm Could Cause Havoc Across US