Appearing on NBC News Sunday Dr Fauci and host Chuck Todd declared that more pandemics are on the way because of climate change and “the globalisation”. 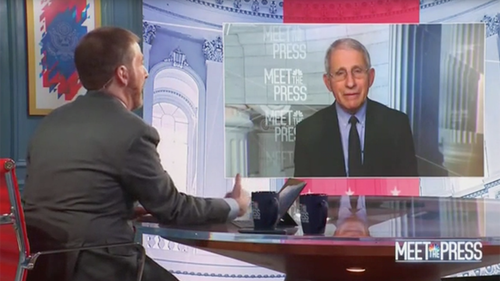 The pair also agreed that a ‘global health security network’ is needed going forward and that anyone planning to go back to their pre-pandemic life is being too hasty.

“I know there’s a lot of folks who think that due to climate change and due to the globalization in general, it’s inevitable, we’re going to deal with more and more viruses like this,” Todd declared.

Fauci responded “Let’s take global to begin with. We have to have a better global health security network of interconnectivity, of communication, of transparency.”

“So that we are talking to each other all the time and know what’s going on. We also have to have a continued investment in the science,” he said, adding “remain global in our interactions. As I have said so many times, a global pandemic requires a global response.”

Fauci also urged that people “need to resist the urge to say, ‘Oh, everything is going great.’”

Fauci added “Once you declare victory, you know that metaphor that people say, ‘If you are going for a touchdown, don’t spike the ball on the 5-yard line. Wait until you get into the end zone.’”

“We’re not in the end zone yet, and that’s one of the issues, that when you plateau, there is always a risk of a surge. That’s exactly what the Europeans experienced,” Fauci continued.

WATCH: Dr. Fauci tells #MTP that “it makes absolutely no sense” for vaccine-hesitancy among Trump voters.

Fauci: “Whats the problem here ? This is a vaccine that is going to be life saving for millions of people…I just don’t understand.” #MeetThePress pic.twitter.com/ke15wK36Cm

First, Todd complained that Trump did not appear in a PSA with other former presidents, despite the fact that Trump wasn’t asked to take part.

Fauci described the findings of a NPR, PBS and Marist poll “disturbing,” adding “How such a large proportion of a certain group of people would not want to make — would not want to get vaccinated merely because of political consideration. It makes absolutely no sense.”

“What is the problem here?” Fauci continued, adding “This is a vaccine that is going to be lifesaving for millions of people. How some groups would not want to do it for reasons that I just don’t understand. “

Fauci also said he couldn’t give a date as to when Americans might be able to schedule things like weddings:

Fauci on if Americans might be able to finally schedule a wedding this year: “That’s a good question … I can’t give you that exact date” pic.twitter.com/hxt2vgRWzM

Scientist Says Plastic Pollution Is Shrinking Penises, Will Make Most Men Infertile by 2045