Update (1055 ET): The first Boeing 737 Max has taken off with passengers from Miami to New York after being grounded for more than 20 months following two deadly crashes.

Boeing’s troubled 737 Max plane was grounded in March 2019 for 20 months after two crashes killed 346 people. The Max is expected to return to the skies on Tuesday morning, carrying passengers between Miami and New York’s LaGuardia, according to Reuters.

The Max’s grounding was lifted in November by the Federal Aviation Administration (FAA) after Boeing made critical changes and software upgrades to the Maneuvering Characteristics Augmentation System (MCAS), an automated flight control system that was responsible for two crashes.

American Airlines Flight 718 (N314RH) is expected to depart from Miami around 1032 ET and land in New York at 1330 ET, ending a near two-year debacle for the US planemaker.

Earlier this month, American Airlines held the first test flight of a 737 MAX 8 since the grounding. The flight involved mostly members of the media, to prove the jet is safe for passengers, an issue that the crash victims’ family members protest the return to service.

The flight from the airline’s base in Dallas, Texas, to Tulsa, Oklahoma, was in preparation for Tuesday’s flight, as was a PR effort by Boeing and the airlines that are its biggest customers to rehabilitate the jet’s image following a record 20-month ban.

Flightradar24 shows N314RH has had a busy December, with multiple test flights across the country. 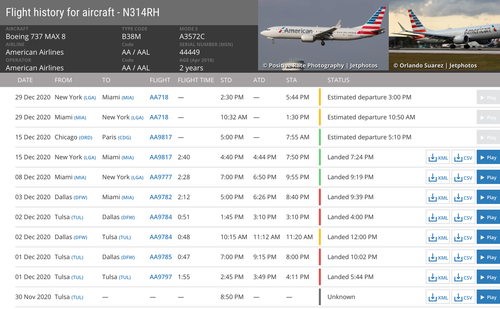 Aeronews recently tweeted a video of a 737 MAX conducting a test flight from Miami.

After N314RH lands in New York this afternoon, the plane will prepare for another flight back to Miami later this evening.

Arguably, the Max debacle has been the company’s worst crisis in its 104-year history.

Decentralizing the Web with Brady Gaisser of DWeb