Although there are many more pressing issues facing the American people that probably warrant the attention of Congress, lawmakers’ remain fixated on the late-January Gamestop trading saga, as the second in a series of Congressional hearings is slated to begin at 1000ET on Tuesday.

This time around, the hearing has been organized by the Senate Banking Committee – officially the US Senate Committee on Banking, Housing, and Urban Affairs – and the witness list consists mostly of academics. Unlike last months’ House Financial Services hearing, where Robinhood founder Vlad Tenev and Citadel’s Ken Griffin (among other big names) endured a public shellacking capped off by AOC’s acerbic grilling of Tenev, Tuesday’s hearing looks to be a much more staid affair.

Notably, the hearing comes at an exciting time: Gamestop shares have been rallying once again, with GME on the cusp of overtaking $250. 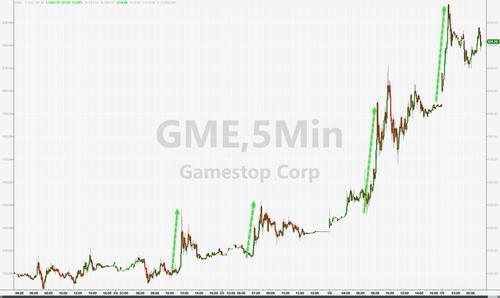 Now, the witness list for the hearing is as follows:

In her testimony, Professor Fletcher, a former lawyer and expert in financial regulation, suggested that the meme stock episode undermined faith and proper functioning of American capital markets.

“When the fundamental operation of the markets is undermined, there are far-reaching effects that extend beyond the capital markets, affecting consumer savings, investments, retirement plans, and the rest of the real economy. The recent market volatility stemming from trading in ‘meme stocks’, most notably GameStop, has raised concerns as to the integrity, stability, and overall health of the markets.”

Read the full testimony below:

The only buy-sider on the witness list for Tuesday is Rachel Robasciotti, the founder and CEO of Adasina Social Capital, which manages the Adasina Social Justice All Cap Global ETF. Robasciotti started her prepared testimony by musing about how the Gamestop saga reminded her of the infamous MIT blackjack team, whose exploits were depicted in the movie “21”.

When the GameStop-Robinhood episode occurred in January, I was immediately reminded of the MIT Blackjack Team of the 1990s, when a group of students banded together to break the bank at several large casinos. They realized that if they worked together, they could win substantially more money than the average gambler. So, using math skills and technology, they coordinated to quickly and strategically place large bets against the house.

She went on to compare the run-up in GME and other “meme stocks” to investment bankers hawking mortgage bonds during the years before the housing market crash.

New School professor Teresa Ghilarducci started by recounting how her students were taken in by the Robinhood-inspired retail trading boom.

Lawmakers will also be hearing from Michael S. Piwowar, director of the Milken Institute Center for Financial Markets and a former Congressional staff economist…

…along with markets scholar Andrew Vollmer.

Next time, maybe lawmakers should try spicing things up by adding Dave Portnoy or another big name to their list of witnesses.

Home Prices Soar At 4.5 Times The Fed’s Inflation Target In All US Cities

Majority Of Americans Already Wear A Mask In Public

Sara Carter: The Swamp Will Never Be Able To Hide Again After Trump