A Palm Beach woman who joked on Facebook about dumping ‘thousands of masks’ on the lawn of the county commissioner got a visit from the Sheriff’s office on Feb. 12, after authorities had surveilled the conversation.

Angelique Contreras, a mother of three, was discussing the county’s new policy to exclude people who refuse to wear masks from public meetings, when a man named Anthony Collins joked about leaving “hundreds of bags of garbage” on the lawn of the county commissioner, to which Contreras added “Thousands of Mask(s).” 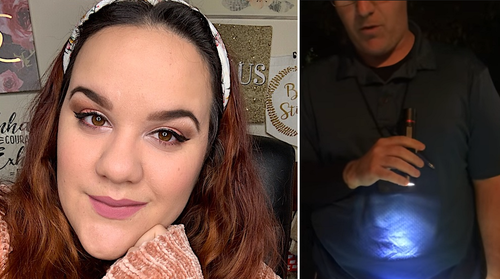 Later, an officer with the Palm Beach County Sheriff’s Office who identified himself as Detective Horton showed up at Contreras’ house and warned her against ‘trespassing’ and illegal activity, according to WND.com.

“The reason why we’re here is, bothering you on a Friday night, is, I guess you and some guy named Anthony were posting on social media that you were gonna go trespass on a county commissioner’s property, dump garbage on her property,” says Horton.

“I didn’t say that I would dump garbage on her property,” Contreras replied.

“That’s the discussion you guys were having,” Horton replied.

“No I wasn’t,” Contreras shot back.

“I can show you the post,” replied Horton – to which Contreras said “I plead the Fifth.”

The only crime committed by Contreras was filming the encounter in vertical mode. Watch:

“Trespassing is a crime. Dumping garbage on people’s property is a crime. So don’t do it,” Horton explained.

Contreras asked: “Is that why you all are here?”

“Going on someone’s property is trespassing, right?” the detective explained.

“I didn’t say any of those words,” she responded. “This is just fear-mongering. You know that, right?”

“Fear-mongering of what?” Horton asked.

“Of a citizen, for nothing,” Contreras said.

“OK, sorry you feel that way,” the detective responded.

“I do, I’m putting my kids to bed, and you’re wasting tax-dollar money to come out here and …”

“Tell you not commit a crime? Yes,” Horton interrupted.

“I’m not committing a crime,” Contreras said, adding she wasn’t planning on committing one.

When Contreras requested to file a trespassing report against an unidentified woman whose identity was known to Horton, they refused to take the report.

Contreras, a hairstylist and makeup artist from a family of Cuban refugees, has since posted the incident all over social media.

“Still looking for answers: Who was the protected and unnamed woman on my property?! Who sent the officers to do their gestapo bidding? Who is watching and reporting my social media post? Why was I targeted?” she posted on Facebook.

Is this the new way to treat a mother at home in the late hours of the night?! A new low by @PBCountySheriff ~ Using abuse of power, violating my safe haven for What?!!! @TuckerCarlson @dbongino @OANN @newsmax pic.twitter.com/nzraPjzmKo

“No matter what a person’s political beliefs are, I do not believe anyone deserves to be bullied by our local government officials. We should not be intimidated by law enforcement. What happened at my house was clearly political intimidation,” Contreras told National File.  “I know what Communism is and we have been living in it for the past year.”