The provocative launches which came in rapid succession from an underwater position in the Western Pacific Sea of Okhotsk were designed to mimic a nuclear deterrence scenario at a moment of lingering tensions with the US over future fate of nuclear and ballistic missile treaties. 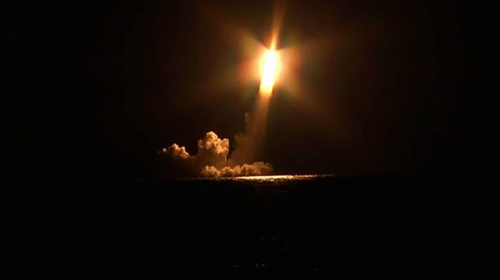 The AP reports of the test: “Their dummy warheads hit their designated targets on the Chiza shooting range in the Arkhangelsk region in northwestern Russia more than 5,500 kilometers (over 3,400 miles) away, the Russian ministry (MoD) said in a statement.”

It was part of large-scale drills featuring Russia’s strategic nuclear forces that began three days prior last week, also at a critical time that the New START nuclear arms reduction treaty with the US is set to expire in early February, which will be largely dependent on the course the Biden administration will take during ongoing US-Russia negotiations to extend it.

Thus far Biden has signaled willingness to extend it with no preconditions, after Trump threatened to pull out based on wanting a new deal which would take into account advancing Chinese missile capabilities.

The defense ministry confirmed it was the first ever such test from this particular Russian nuclear-powered ballistic missile submarine (SSBN).

The R-30 ‘Bulava’ intercontinental ballistic missiles that were successfully launched have been in operation since 2018 after being deemed experimental following their development since the 1990s.

Likely the test and dramatic well-edited video subsequently put out are intended to put pressure on the incoming Biden administration to move quickly on extending New START with no preconditions for up to five years, as Vladimir Putin has previously expressed readiness to do right away.