For the first time, the Sikorsky S-97 Raider flew multiple flight demonstrations this week for service leaders and soldiers at the company’s test center at Redstone Arsenal in Huntsville, Alabama.

Defense giant Lockheed Martin, who owns Sikorsky, released a press release on Thursday detailing the demonstrations on Tuesday and Thursday. 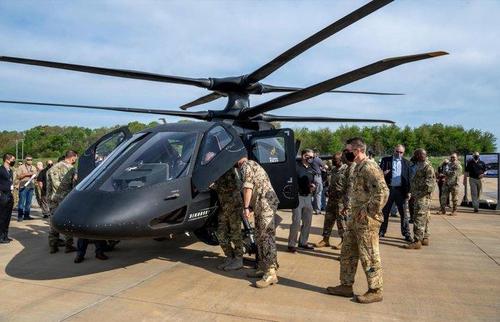 The Sikorsky S-97 Raider is based on its X2 coaxial-rotor technology, making it a fast and agile aircraft, well suited for the modern battlefield. The new FVL is expected to fill a capability gap left by the retirement of the Bell OH-58 Kiowa helicopter.

“Since the first Black Hawk took to the skies in the 1970s, to when our teams broke helicopter speed records with X2 Technology in 2010, we have been working with our Army partners to develop and deliver low-risk, transformational, affordable and sustainable aircraft to support the warfighters’ missions,” said Sikorsky President Paul Lemmo, who was at the demonstrations.

Lemmo continued: “This is the first of what we believe will be many times our X2 Future Vertical Lift aircraft will fly at Redstone.”

“Flying RAIDER continues to amaze me,” said Corry, a former U.S. Marine with more than 4,500 flight hours in 25 different types of aircraft, including numerous helicopters.

“The combination of the coaxial rotors and the propulsor are really the enablers for this transformational technology. As we demonstrated today, in low-speed flight we are as capable as a conventional helicopter, but when we engage the prop, we are able to operate in a whole new way – it’s much more like flying an airplane,” he said.

In 2018, the Army selected two FARA candidates. Sikorsky is currently in the running with the S-97 Raider and Bell’s V-280 Valor tiltrotor.

FARA aircraft are expected to replace the military’s aging fleet of helicopters in the coming years as part of a vast modernization effort to counter China and Russia.

Watch the S-97 Raider demonstrations below:

The World Is Suffering From Mass Delusional Psychosis

10 Recent Examples Of Biden Blowing Up At Reporters: “The Rage Is Back”