Authored by Sara Carter via SaraACarter.com,

An Uber Eats driver was killed by two young teenage girls in Washington D.C. after they carjacked his vehicle last Tuesday on March 23, in one of the most shockingly horrifying videos posted on Twitter. 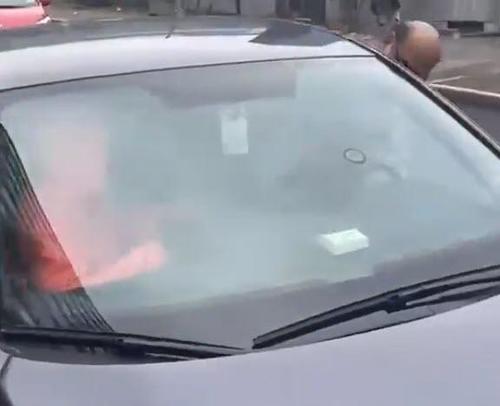 What was even more shocking was that CNN called it an accident and now people are calling out the cable network on its decision to use the term to describe the incident, which was caught on video.

They murdered an Uber Eats driver in DC. pic.twitter.com/Zz7xOu0Piv

It is clear that it was no accident. The teenagers took off at high speed with the while the desperate driver was hanging onto his driver’s side door. He had been begging for them to get out. He was eventually thrust from the vehicle into a wall and the National Guard on the street attempted to clear the area. The girls lost control of the vehicle, which ended with it crashing on its side.

Passersby watched in horror and recorded the incident, saying they were calling the police before the vehicle burst off at high speed.

“A man died and two girls, ages 13 and 15, face felony murder charges after police say the girls carjacked the man near Nationals Park on Tuesday, used a stun gun against him and caused the car to flip,” NBC reported.

Here’s the way CNN described it:

“D.C. Police said the girls, 13 and 15, assaulted an Uber Eats driver with a Taser while carjacking him, which led to an accident in which he was fatally injured.”

Police said the girls, 13 and 15, assaulted an Uber Eats driver with a Taser while carjacking him, which led to an accident in which he was fatally injured. https://t.co/N6RpLoTu8x

The retweets to CNN reflected the concern that use of the word accident was because the two girls were black and had they been white the situation would have been described differently.

Those black girls murdered him. They deserve to pay for their actions. Change this tweet and stop covering for them.

I personally am concerned about the continuous push by the left to divide the nation over race. Over the last year, the leftists Democrats and the Biden administration has consistently pushed a racial divide.

CNN is run by apologists for brutality. https://t.co/TTdRJ5ZRtp

According to reports there is a fundraiser for the family of the Uber Eats driver Mohammad Anwar. He was 66 years old of Springfield, Virginia according to the reports.

Here is the fundraiser for the family of 66-year-old Mohammad Anwar, the Uber Eats driver who was brutally murdered by two girls who were attempting to steal his car while he was working in DC https://t.co/Po0XjbYVGU

The arrests were reported by the D.C. Metropolitan Police Department.

MPD announces arrests in a Homicide and Armed Carjacking (Taser) offense that occurred on 3/23/21 in the 1200 block of Van Street, SE.

Thank you to all who assisted in making DC safer with these arrests!

At the end of the video one of the girls complains that her cell phone is still in the car.

I like the part at the end where one of them is complaining about how her phone is still in the car of the man she and her pal murdered.

SaraACarter.com will be following up on this story Sunday with the Washington D.C. Police for the latest but can you imagine the driver’s family getting the call last night that their loved one had been murdered.

The Upside of a Stock Market Crash

The Power To Imprison — Life in Pandemicland

News of the World