The UK government Culture Secretary announced Thursday that “Covid-19 certification” is coming to enable people to attend sports events and go to theatre performances, but in the same breath denied that COVID passports are being introduced. 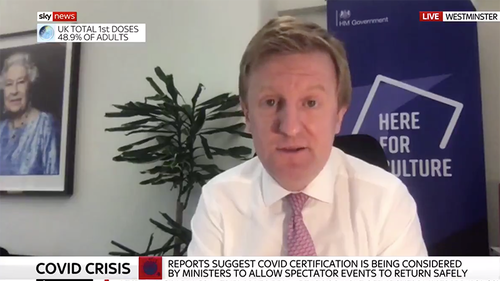 Appearing on Sky News, Oliver Dowden said that the government is trialling a system to ensure those who can prove they have taken a vaccine will be able to attend mass gatherings.

“We will be testing whether we can use Covid-19 certification to help facilitate the return of sports,” Dowden said, adding it will “help the return of the things that we love.”

Culture Secretary @OliverDowden tells @skygillian that govt is considering ‘COVID certification’ to help facilitate the return of sporting events by “proving people have had a vaccine”, but says “there won’t be a vaccine passport”.

Dowden asserted that the certificates “won’t be a vaccine passport”, yet defined them as “a way to facilitate proving” that people have had vaccines, in order to get “more people get into stadiums,” which he described as “vital not just for our sense of national well-being, but to the whole national economy.”

wtf is that then. it’s just a different name.

As we have repeatedly covered, the British government has consistently denied that there are any plans for vaccine passports while simultaneously funding schemes to that effect and conducting extensive trials.

First, Ministers said there were “no plans” for vaccine passports.

If true, the review is 🗑; parliament has been misled; the public has been lied to. https://t.co/o3iH0xgvtb

If you want your health to be YOUR own business and don’t want to need Covid vaccine proof to go to the pub, the cinema, a concert or a football match, then I suggest you make your views known in this Government consultation NOW. https://t.co/9ghDOQwJYN

Why The UK Government Now Must, But Won’t, Abandon Lockdown