On Thursday Iran’s state media condemned the action of a “foreign” vessel which it said “intended to approach the naval drill” that Iranian forces are currently conducting in the Gulf of Oman.

Later Iranian state media published rare footage of a submarine in the vicinity of the two-day naval exercise, specifically in or near the Strait of Hormuz. The submarine is said to have departed soon after the incident following an Iranian Navy warning.

Though the US military has declined to comment, the AP is now reporting it appears to have been the USS Georgia nuclear submarine. “Helicopter footage of the exercise released by Iran’s navy showed what resembled an Ohio-class guided-missile submarine, the USS Georgia, which the U.S. Navy last month said had been sent to the Persian Gulf — a rare announcement aimed at underscoring American military might in the region,” according to the AP.

The fact that the US submarine surfaced so near to the Iranian naval drills suggests this was a bit of provocative high-stakes intentional messaging by the Pentagon.

Here’s more according to the AP:

Iran’s navy did not identify the submarine, but warned the boat to steer clear of the area, where missiles were being launched from land units and ships in the gulf and the northern part of the Indian Ocean. When asked for comment on the reported submarine sighting, Cmdr. Rebecca Rebarich, a spokeswoman for the U.S. Navy’s Bahrain-based 5th Fleet, responded: “We don’t talk about submarine operations.”

The direct overhead footage was taken from an Iranian military helicopter patrolling the area. It appears to have hovered over the sub as a warning message to leave.

Indeed it appears to have been a brief but dangerous standoff which could have easily turned into a live-fire incident between the two enemy forces.

Am sharing ID as the video is out there and there’s no doubt what/who it is. pic.twitter.com/WPQsue1Zkx

Such a direct encounter between an American submarine and Iran’s military is very rare to say the least, especially given it was caught on film. 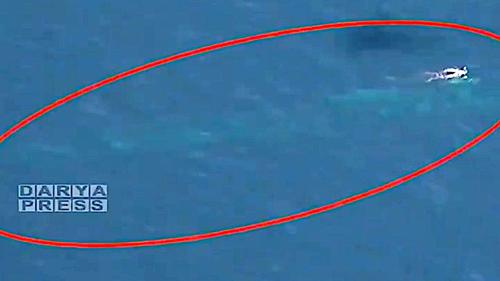 The circumstances of the shallow pass are unclear. The submarine is shown at periscope depth. A single DDS (dry deck shelter) is seen on the port side of the casing behind the sail. This hangar can carry SEAL Delivery Vehicles (SDVs) used by the US Navy SEALs.

The US Navy’s four Ohio Class SSGNs are by far the most heavily armed conventional strike platforms in the world. They can carry a total of 154 Tomahawk Land Attack Cruise Missiles (TLAM Block-IV) in their missile silos. When added to the torpedo room, this gives a total of 176 full-size weapons. Although the maximum load is reduced when the DDS is fitted.

A foreign submarine, apparently #American, intended to approach the Iranian Navy drill zone, but it was spotted and warned to leave the area. The war game zone of Iranian Navy covers the Makran coasts in southeast #Iran and the northern areas of the Indian Ocean. pic.twitter.com/8MLwEBa3fa

The USS Georgia entered the Persian Gulf area sometime in mid to late December as tensions between the US and Iran rose amid reports that Trump was mulling some type of preemptive action, also at the urging of Israel.