“We Are Sitting On An Incredibly Important Turning Point”

Last week in his latest Doubleline webcast, Jeff Gundlach presented a remarkable chart, one showing that the ratio of the Nasdaq to the S&P 500 has been pulled lower (due to Nasdaq underperformance coupled with strength in value stocks) and is now right on its dot com bubble peak levels. 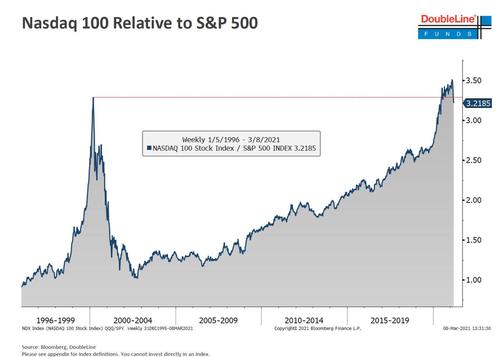 Picking up on this chart, over the weekend in his latest Bear Traps Report, Larry McDonald wrote that “we are sitting on an incredibly important turning point” adding that “the world’s first and second most liquid and arguably most important stock indices are sending important rotation signals. In our view, both tech and growth equities outperformance run is over and the rotation to value and commodity exposed equities has begun.”

Said rotation will only accelerate depending on what Powell says on Thursday, especially if he doesn’t sound sufficient dovish and spooks markets again, triggering another bond rout, which by extension means a selloff in growth stocks which – as we have noted on many previous occasions – have near record high duration and are thus merely bond proxies to which hedge funds have never been more exposed.

However, while all eyes were on the 10-Year during the late February “reflation panic” selloff which was sparked by a liquidation cascade in bonds once the 10Y breached 1.50%, the place on the Treasury curve where the next liquidation cascade could begin is now the belly, because as Bloomberg writes whereas back in December the thought was that the Federal Reserve might tamp down long-term Treasury yields, the issue now lies with shorter-dated ones, and specifically 5-year rates.

Yields on that maturity have become unanchored in recent weeks, surging above the previous “red line” of 0.75% amid speculation that the Fed will need to start a cycle of rate hikes perhaps a full year earlier than officials have indicated. That shift has also roiled the outlook for a classic iteration of the reflation wager, a widening gap between 5- and 30-year yields, even as the narrative of a stimulus-fueled recovery has only gained momentum. 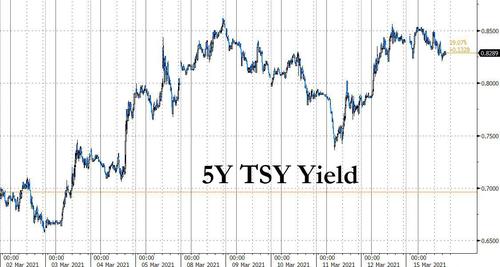 “The Fed next week will have to walk a fine line between either pushing back against market expectations or allowing them to stand,” said Kevin Walter, co-head of global Treasuries trading for Barclays. Without Fed pushback “there might be more pressure on the belly of the curve,” in which case the best steepeners would be the spreads between 2-year yields versus 5- and 7-year rates that have room to rise as traders price in tightening.

And while most investment bank research divisions, and certainly the Fed, do not expect any liftoff until at least 2023, the swaps market has been reflecting a roughly 75% chance the Fed lifts rates from near zero by around the end of 2022. Indeed, Walter expects no major policy changes next week and anticipates that officials will continue to project rates on hold through 2023, however even doing nothing may force another round of selling amid the recent bout of soaring inflation, one seen as a push by the market to force Powell into some form of Yield Curve Control. 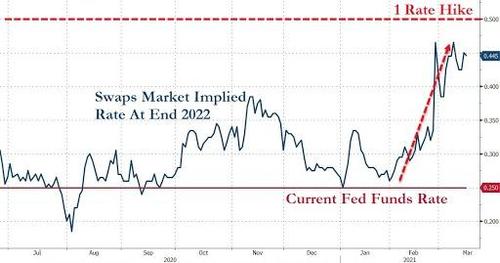 On the remote chance that the Fed does signal some 2023 hikes next week, the market will probably bring expectations for rate increases into the first half of 2022 and the 1-year-forward 5-year rate could increase 50 basis points, Peter Chatwell, head of multi-asset strategy for Mizuho International Plc, said in an emailed note. It would also lead to renewed rotation out of growth and into value, further depressing the Nasdaq to SPX chart shown above.

That said, most don’t expect Powell to address the continued selling in either the long-end or more recently, the belly – the Fed chair gave only a minor reference to the bond-market slump that drove 10-year yields above 1.6%. He emphasized the importance of financial conditions, which remain accommodative, although tech stocks did sink on Friday as yields surged.

None of this will help ease inflation fears as the market fears the Fed is rapidly falling behind the curve. As we noted last week, 5Y inflation expectations at the highest since 2008 and robust jobs data have only reinforced bets that the Fed will need to tighten more quickly than it’s been forecasting. The speculation has squeezed wagers on a steeper curve from 5 to 30 years, shrinking that spread to a bit above 150 basis points, from a more than 6-year high of 167 in February. The 5-year yield at 0.84% isn’t far below its highest level since last year. But at the same time, the 2-year has remained near historic lows on the view that the Fed will hold rates near zero for the immediate future. That’s kept bets on the widely watched spread to the 10-year rate in play, as well as versus other maturities, such as the 5- and 7-year.

And with the front-end anchored for a long, long time, the question then becomes what is the most lucrative steepener trade. “Some steepeners are better than others,” said Patrick Leary, senior trader and chief market strategist for Incapital. He expects the 2s10s to keep widening, but has taken profits on steepeners and is looking for a better point to re-enter. Other see potential in the 5- to 30-year steepener. TD Securities has recommended entering that bet at 146.5 basis points, targeting 170, based on what it said was a high bar for hikes and the prospect of elevated coupon supply.

Taking a step back, the reason why traders have been so focused on the 5-year part of the curve, i.e., “the belly”, is because it’s seen as one place that may bear the brunt of any subsequent selloff should rate-hike speculation mount further, since the bulk of the liftoff regime is expected to take place within the maturity of a 5 Year note issued now.

Furthermore, as Bloomberg notes already certain corners of the market are turning their attention to the potential for multiple rate hikes. In swaptions, a position has emerged targeting the Fed to hike seven to eight times by March 2025, according to a Barclays analysis.

There is, of course, the risk that markets have gotten ahead of themselves – the whole point of a recent RIC report from BofA, which does not see anywhere nearly enough sustained inflation to justify a 2022 rate hike, let alone 7 by 2025: “it’s possible the market may have gotten a little ahead of itself in the belly,” causing the 5-year rate to rise too much, said Jamie Anderson, head of U.S. trading for Insight Investment. If the data come in weak or the Fed is on hold for longer than expected, “the belly should rally and the curve re-steepen,” he said.

For Incapital’s Leary, the narrowing in the 5s30s gap came on the view that officials may discuss – or even announce – a twist next week. Such an operation, involving the sale of shorter-dated holdings and purchase of longer maturities to control yields, would put more pressure on the belly, he says. That would follow the European Central Bank’s decision to ramp up its bond-buying pace.

“All these trades are highly dependent on the Fed being on the sidelines and not changing its policy stance,” Leary said. “The market is definitely playing a game of chicken with the Fed, by testing how high yields can get before tightening financial conditions and forcing the Fed to step in.”

If all this sounds unnecessarily convoluted, we remind you of what Rabobank’s Michael Every said overnight, in what may be the best summary of the Fed’s options:

“If Powell does nothing, we could perhaps be on the verge of a 2013-style Taper Tantrum. That would send Godzilla-sized shockwaves through markets everywhere, including Tokyo. (And I now think of 1970/80’s British TV ads where a Mock-zilla would eat famous global landmarks before deciding he preferred a certain candy “even chewier than a Barrow-in-Furness bus depot.”) “

“Of course, Powell could say something or do something: Operation Twist and Shout; or YCC. First of all, this would then show that there is a disconnect between the Treasury and the Fed, which is hardly ideal. Moreover, such steps would prompt a major market flattening, but of two different kinds (short end up and long end down; or just long end down). As I keep repeating here, YCC would also open the door for some seriously new epic adventures, like opening the mysterious giant gate behind which King Kong is found on his remote island.”

In short, brace for a burst of volatility on Thursday when Powell (and tech stock bulls) will be damned if the Fed Chair doesn’t do anything, and damned if he does…