Perhaps we have collectively “lost our mind.” Perhaps what we need is not a new technology but a new way of living that uses existing technologies to echo “old ways” that worked rather well on much lower energy consumption.

The Great Reset is much in the news–the proposed top-down plan for combating climate change designed by the global elites, who then as now will be jetting around in private aircraft while dictating exactly how the rest of us will reduce our carbon footprints.

My CLIME proposal takes a much different approach: change the way money is created and people are paid to create a new incentive structure that lets people and communities decide how best to reduce energy consumption and waste and address scarcities. (CLIME is described in my books A Radically Beneficial World: Automation, Technology and Creating Jobs for All and A Hacker’s Teleology: Sharing the Wealth of Our Shrinking Planet.)

Charlie Munger (head of Berkshire Hathaway) famously said: “Show me the incentive and I will show you the outcome.” That’s how humans operate: we respond to the incentives presented, even if they destroy the planet.

How do we instantiate incentives? With rewards: money, power, status, recognition, praise.

How do we instantiate disincentives? With punishment: imprisonment, fines, closure of businesses, social shunning.

Being social animals, humans are hard-wired to value status, recognition and praise. But first we must have a livelihood and some way to feed, clothe and house ourselves. So we must first have access to the essential resources needed for life, what I call the FEW resources (food, energy and water).

There are many other resources we need to access, of course–minerals, building materials, and so on–but the point here is our access to these resources can be direct (you grow your own food) or indirect (you earn money which you use to buy food).

With these incentives, rewards and process for creating money, the only possible result is a doomed, dysfunctional status quo, what we have now. I’ve laid all this out in greater detail in my books:

Why Our Status Quo Failed and Is Beyond Reform

Inequality and the Collapse of Privilege

As I always say: If you don’t change the way money is created and people are paid, you change nothing. (I explain the dynamics of money and work in my book Money and Work Unchained.)

This is why The Great Reset is a fraud: it doesn’t change the incentives via how money is created and people are paid, so it changes nothing. All it does is further consolidate wealth and power at the top of the wealth-power pyramid.

Relying on The Authoritarian Savior State is also doomed, for reasons I explain in my books Pathfinding Our Destiny and Resistance, Revolution, Liberation: A Model for Positive Change.)

What we need is The Great Rebalancing, a rebalancing of the planet’s resources and human needs.

My proposed CLIME system instantiates the incentives and mechanisms needed to rewire the global economy.

CLIME is the Community Labor Integrated Money Economy. In CLIME, money is created solely to pay people for performing useful work in their community. The only way money can be created in CLIME is to pay people for work the community deems useful and that meets the CLIME standards, which are simple:

1. The primary goal is not to maximize profit by whatever means are available. (Profit and a return on capital remain incentives, but they’re no longer the only incentives.) The goal is to use the least amount of energy and resources to perform the needed work / fill essential scarcities.

2. Every manufactured item must be 95% recyclable or reusable by design, and the cost of this recycling / reuse is in the initial price.

Consider photovoltaic (solar) panels as an example of what the current system incentivizes. The current generation of panels is not recyclable at scale–and neither are the lithium-ion batteries that store the PV electricity. PV panels and lithium-ion batteries are just more toxic “stuff” going to the landfill in our infinite-growth Landfill Economy.

“The International Renewable Energy Agency (IRENA) estimated that the world had 250,000 metric tons of solar panel waste that year; and by 2050, the amount could reach 78 million metric tons.” Source

The same is true of thousands of enormous fiberglass wind turbine blades–impossible to recycle or reuse, they’re being buried in giant landfills.

It’s difficult for many people to imagine a world in which the incentives are to consume as little energy and resources as possible and waste as little as possible, but money and the economy are human constructs: they can be changed at will.

Change the way money is created and people are paid, and you change the incentive structure and thus the outcome.

We are so accustomed to staggering waste that we cannot imagine how we could manage without burning 90 million barrels of oil a day (and vast quantities of natural gas and coal).

What never ceases to amaze me is how many people seem to have forgotten that great civilizations and cities flourished without fossil fuels. The capital of the wondrous Tang Dynasty in China (near present-day Xian) contained upwards of 1 million people circa 700-900 A.D., and was a complex entrepot of trade and treasure from distant lands.

The great Thai capital of Ayuttaya also had nearly a million residents in the 1600s and early 1700s before it was sacked and burned by the Burmese army; Westerners had carved out their own small quarters in the sprawling city.

Neither Imperial Rome nor the Song Dynasty’s capital, Hangzhou (circa 1100-1275 AD) consumed much hydrocarbon energy.

For more on what daily life was like in Hangzhou, find a copy of the marvelous 1964 book Daily Life in China on the Eve of the Mongol Invasion, 1250-1276.

Paris and the other great cities of Europe thrived in the same timeframe (1600s and 1700s) with (by today’s standards) extremely modest use of fossil fuels.

Those who expect a decline in energy availability to immediately lead to civilization-ending chaos overlook how similar life was in 1906 San Francisco, when hydrocarbons generated (by today’s standards) modest amounts of power and biofuel transportation (i.e. horses) were the common form of drayage.

The machinery of that era was terribly inefficient. With current technologies, very modest amounts of energy could power a very rich lifestyle if we measure lifestyle not by wasteful consumption but by having enough food to eat, useful work to do, mobility and access to various entertainments.

Consider this 8-minute film of Market Street in downtown San Francisco shot a few days before the catastrophic earthquake and fire of 1906. A trip down Market Street before the fire (Library of Congress) 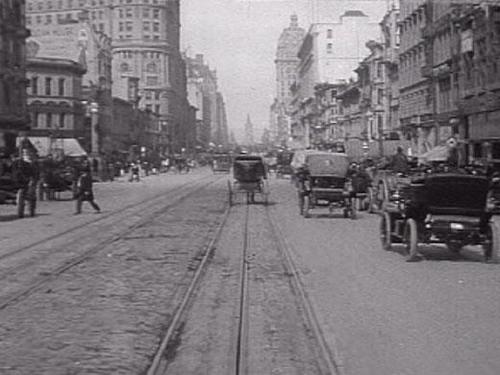 Yes, there are plenty of jalopies (autos) careening through the traffic, but note the wealth of transport options. An endless string of cable cars moves up and down Market Street (that they are cable cars is evidenced by the cable trough running between the rails). To the right, a procession of horse-drawn carts and wagons head down toward the Bay–the 1906 equivalent of today’s diesel trucks.

Toward the end of the film, as the trolley approaches the Ferry Building, you can see a small horse-drawn trolley entering Market Street (the rear sign identifies it as a “Montgomery Street” trolley.)

Electric trolleys (note the overhead arm to the conducting wire) crossed the street numerous times. You will also see many people on foot–still a reliable mode of transport, as well as bicyclists and an occasional rider on horseback.

On several occasions, people are almost struck by cars; pedestrians, as in Developing World countries today, had to keep their wits about them. Those unfortunate enough to be struck very likely did not sue the city or the owner of the vehicle; if you couldn’t manage crossing the street competently, then it was assumed you knew better than to try.

There are no street lights or even police guiding traffic. This is very much like the semi-chaotic traffic which is commonplace outside the First World.

To the First World resident accustomed to being told what to do and ordered about at all times, this seems like madness. But notice how it all works quite well without a huge costly structure to organize and control conformity. Indeed, it is a truism of city-street traffic control that people drive more cautiously and thus more safely when there are limited or no traffic controls.

Our present culture cannot grasp the potential of energy devolution. When I heard James Howard Kunstler speak a few years ago, he observed that many people approached him expecting a pat on the back for buying a Prius. Jim noted that these souls did not yet “get it”–the automobile-centric and suburban, auto-dependent economy and culture was the problem, and the Peak-Lithium auto is no different from the Peak-Oil vehicle. (Manufacturing the Peak-Lithium auto consumes even more oil than manufacturing the Peak-Oil vehicle.)

From a very basic point of view, the more decentralized options that are available, the better; just as monoculture crops lead to disease and crop failures, so mono-systems lead to extreme vulnerabilities.

The “modern” (infinite growth, maximize profits) impulse is to “fix” the vulnerabilities created by mono-systems with more costly and complex “fixes.” Then as these “fixes” trigger more unforeseen consequences, another round of ever-more complex and costly engineering is applied to “fix” the “fix.”

This is how systems become so high-energy, high cost and complex that the returns of further investments become ever more marginal, and the system eventually collapses under its own weight.

The idea that a great city could depend largely on human power, animal power, water/wind-based transport and energy-efficient transport strikes those inculcated with the “infinite growth” religion/mindset as “primitive.”

But if we were able to go back in time and ask the well-fed, well-dressed, well-educated (and oh-so-busy) passersby on the streets in 1906 if they were living a “primitive,” “deprived” life in a “chaotic” city, they would very likely have reckoned that you had lost your mind.

Perhaps we have collectively “lost our mind.” Perhaps what we need is not a new technology but a new way of living that uses existing technologies to echo “old ways” that worked rather well on much lower energy densities and much lower energy consumption. (As for relying on A.I. to save the day and perform miracles, I dismantle this fantasy in my book Will You Be Richer or Poorer? Profit, Power and A.I.)

The Great Rebalancing need not be painful. We simply need new incentive structures that change the outcome from waste, fraud, fatal asymmetries and fatal synergies to paying and rewarding people for doing more with less–much less, and only creating money to pay those doing more with less.

This essay was first published as a weekly Musings Report sent exclusively to subscribers and patrons at the $5/month ($54/year) and higher level. Thank you, patrons and subscribers, for supporting my work and this free blog.