Just before the madness at the Capitol broke out Wednesday, news came from London. Wikileaks founder Julian Assange, who seemed Monday to be the luckiest man alive when a judge denied an American request to extradite him, was now denied bail on the grounds that he might “fail to surrender to court to face” the inevitable U.S. appeal. He goes back to legal purgatory, possibly a worse outcome than extradition, which might be the idea. 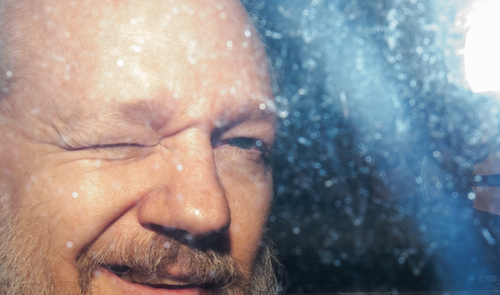 We sell politics in American media as a soap opera, and the personalities make for lively copy, but properly following the bouncing ball means watching institutions, not characters. Where are armies, banks, central banks, intelligence services, the press? Whose money is talking on the floor of the House and the Senate? How concentrated is financial and political power? How do public and private institutions coordinate? When they coordinate, what are their collective aims? How transparent are they or aren’t they? How accountable?

Our invasion of Iraq had been a spectacular failure — unlike pictures of returning coffins, that couldn’t be completely covered up — and Americans learned about grotesque forms of war profiteering. These included the use of mercenaries to whom the taxpayer unknowingly paid lavish sums, to commit horrific war crimes like the Nissour Square Massacre, also known as “Baghdad’s Bloody Sunday.”

One of Donald Trump’s most indefensible (and bizarrely, least commented-upon) acts was the pardon of the four Blackwater guards who shot and killed those seventeen Iraqi civilians, including women and children. The New York Times story covering the Blackwater pardon spent just four paragraphs on the case, sticking it below apparently more outrageous acts like the pardon of George Papadopoulos.

“Baghdad’s Bloody Sunday” took place in 2007, by which time we were bombing and kidnapping all over the world, disappearing people off streets like the Bogey Man of fairy tales. Detainees were taken to secret prisons where, we later learned, efforts by prisoners to starve themselves out of their misery were thwarted by a diet of raisins, nuts, pasta, and hummus rocketed up the back door through “the widest possible tube.”

Even years later, one Gitmo prisoner would waive his right to appear in court because “rectal damage” made it too painful to sit. We made mistakes in who we selected for this treatment, grabbing people with no connection to anything for torture, as films like Taxi to the Dark Side documented. However, Americans seemed to lose interest in these policies once the Iraq misadventure came to a sort-of end, and a new president was elected.

The rise of Wikileaks introduced an uncontrollable variable into our drift toward authoritarianism. The WMD episode had shown again that our press, the supposed first line of defense against abuses, could not be relied upon. For every expose like Abu Ghraib, there were a hundred stories that either went uncovered or advanced official deceptions.

Wikileaks anticipated a future in which the press would not only be pliant accomplices to power in this way, but where information itself would be tightly controlled by governments using far-reaching and probably extralegal new technological concepts, deploying misleading excuses for clampdowns.

One of the first Wikileaks document dumps involved the Thai government’s blacklist of Internet sites, which was billed as a way to stop child pornography but had in fact been used to remove as many as 1200 sites critical of the Thai royal family, among other things. “The Thai system was used to censor Australia reportage about the imprisoned Australian writer Harry Nicolaides,” Assange noted, in 2009.

Wikileaks also released the Camp Manual for Guantanamo Bay, which among other things revealed that children as young as 15 were being held, along with 900+ other files about a place essentially closed off to even theoretical press review. Another early dump involved the Minton report, about toxic dumping in the Ivory Coast by the firm Trafigura, which in yet another preview of a future of information control had obtained a court order to prevent The Guardian from printing.

In the 2010 Collateral Murder video, an Apache helicopter crew falsely claims to have encountered a firefight and lights up a Baghdad street, killing a dozen people, including two Reuters employees. Somehow even more disturbing than the killing is the dialogue captured between pilots and base. They’re laughing in parts, saying things like, “Just fuckin’ once you get on ‘em, just open ‘em up,” “All right, hahaha, I hit em,” and “Hey, you shoot, I’ll talk.”

For all the talk about the madness of Donald Trump — and I wrote one of those pieces — this was something more dangerous, i.e. institutional insanity. We were factory-producing sociopathic murder, by air, in a process that would become more depersonalized. As early as 2011 we learned the Pentagon was working on a software-based system for identifying and eliminating targets by drone, in an effort to remove the potentially complicating variable of human conscience. The implications of this are the stuff of sci-fi movies: outsourcing feeling, judgment, and responsibility to machines, which incidentally would eventually use similar software to determine how much about these questions could be disclosed to human audiences.

Collateral Murder came out when Americans were also learning about serious corruption at home. After the 2008 financial crash, the Obama administration made historic decisions to reorganize the economy through a series of bailouts and interventions that not only rewarded the worst actors, but super-concentrated power in the hands of newly merged financial institutions. The most significant decisions were made in secret, including at a remarkable post-crash meeting of financial leaders at the Fed whose lurid story would be reinvented as heroic fairy tale in Too Big To Fail.

Wikileaks would go on to release financial secrets as well, including the draft charter of the Trans-Pacific Partnership and, far more damaging, eighty pages of transcripts of paid speeches Hillary Clinton to Wall Street banks, where again the most damaging revelations were lingual. Clinton was shown admitting she was “far removed” from ordinary life because of the “economic, you know, fortunes that my husband and I now enjoy,” while speaking to Goldman, Sachs about the importance of developing “a middle class that can buy the products.”

By 2016 Assange had been peeled away from many public supporters. A long campaign of surveillance and multiple scandals dimmed his star, with lowlights including the issuance of a Swedish arrest warrant over an alleged sexual assault. People will argue about whether or not he brought this fate on himself. To me it’s irrelevant: the issue, again, is the institution, not the person. The institutional concept of an unregulated leak site has always been the target in this story, far more than Julian Assange.

Even if one stipulates that every piece of negative news ever written about Assange is true, his story is still primarily about the closing of an informational loophole during a time of ambitious efforts to throw a net of secrecy around the expansion of executive power. It was big news in the Bush years when an American named Jose Padilla was whisked away as an enemy combatant. In the Obama years, the pushed envelope was the first droning without trial of an American, al-Qaeda’s Anwar al-Awlaki. Was he the most sympathetic victim? Maybe not, but the widened principle mattered. And there was the matter of his sixteen-year-old son, whom we also killed. These decisions took place in an increasingly large space exempt from public review of any kind.

When Assange disappeared into the Ecuadorian embassy in London in 2012, there were already discussions about bringing him to the United States to face treason charges. This was a death penalty offense, the Brookings Institution noted, not worrying at the oddness of charging a foreigner with such a crime. Long before 2016, when Assange lost the support of most liberals for good through the release of the Podesta and DNC files, politicians like Joe Biden were calling Assange a “high-tech terrorist,” language that ought to have raised serious questions given the practices revealed in Collateral Murder, and cases like al-Awlaki’s: we kill terrorists, after all.

Assange isn’t there yet, but he’s on his way, a health wreck. As Italian journalist Stefania Maurizi explained in our interview on Useful Idiots this week, Assange has not been outside since 2012. He seems destined to end up sharing the fate of those Gitmo prisoners in head-bags whose condition was one of the first Wikileaks scoops: kept in a kind of legal nowhere forever, unable even to escape through suicide.

Like the Blackwater pardon, the Assange prosecution was simultaneously one of Trump’s worst and least-commented-upon acts. This was a real act of authoritarianism, not some piddling conspiracy with Giliuanis and Stones, but an act made in full cooperation with the awesome power of the American state. We’ll learn a lot about the Biden administration’s real attitude toward Trump’s “authoritarian” leanings by their handling of the case. It should tell people something that the same Obama White House that prosecuted eight leakers under the Espionage Act hesitated to go there with Assange. They understood the implications.

When interviewed about the case in 2019, former Attorney General Eric Holder was asked if a publisher should be charged criminally. “If you are acting in a pure journalistic sense, no,” he said. “You look at the leaker you don’t look at the journalists.” However, he said, “if you’re acting at the behest of a foreign power, you are in a fundamentally different position.”

The Assange indictment, however, is not about working with a foreign power, but entirely about Collateral Murder-era actions. Seventeen of the eighteen counts are Espionage Act charges that criminalize the obtaining, possessing, and publishing of “national defense information”: 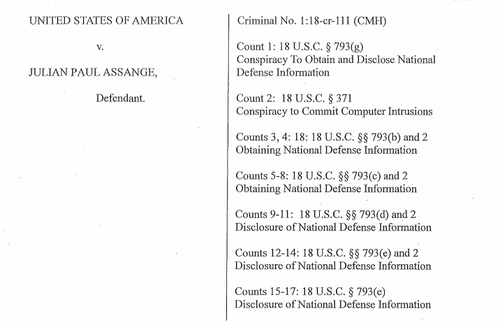 The last count is about the alleged offer to help Manning crack a security hash. Given that each of the Espionage Act counts carries a potential ten-year sentence, this case is about making not just the release, but even the solicitation of material like Collateral Murder punishable by life sentence.

You don’t have to like Julian Assange to grasp the gravity of this. The application of the Espionage Act in this fashion means that reporting going forward will only be legal when not really damaging. This is the outcome Nixon wanted in the Pentagon Papers case (“Goddamn it, somebody’s got to go to jail on that!”). It makes the reporter on the next My Lai or Abu Ghraib a potential criminal or unperson.

In conjunction with the widespread recent crackdowns on other kinds of speech by tech platforms, the continued exile of other transgressors like Snowden, and the rehabilitation of people like former CIA chief John Brennan, who committed perjury about these issues in the congressional chamber whose violated sanctity so infuriated America this week, it’s an enormous power grab — not a temporary one like the Capitol occupation, but a permanent, far-reaching assertion of institutional dominance.

In our discussion with Maurizi this week, she talked about having her phone seized and its contents stolen by yet another American mercenary firm, as part of a sweep apparently done to every visitor to Assange in the embassy years. “They secretly unscrewed my phone,” she said, adding that data and pictures from her sim card were downloaded, her conversations with Assange recorded. “And they knew I was a journalist,” she said.

Even though at least one of the affected journalists visiting the embassy was from the Washington Post, there was almost no reaction here at all. We’ve become inured to these violations. The authoritarian behaviors that freaked people out in the Bush and early Obama years have become as invisible as air to most Americans, who, lucky for many, mostly stopped following that bouncing ball the moment Trump arrived. Now Trump is on his way out, but the lockdown era is just beginning. You’ll forgive me if I’m more scared of that than the other thing.

POLL: Who Is The Greater Danger To The American People?