What Are The Economic Impacts Of A $15 Minimum Wage Hike

Update: at almost the same time this article went to digital print, the CBO released its estimates on the effect the $15 min wage would have. In a nutshell:

Following this weekend’s full-on assault by Biden’s SecTres Janet Yellen pitching the admin’s massive $1.9 trillion stimulus package, many questions remained unanswered. As Rabobank’s Michael Every wrote this morning, even a $1,400 check – assuming it passes – does not change that fact for many. Also notably, while predicting full employment in 2022 if and only if the Biden plan passes, Yellen admitted that the stimulus bill does not create any jobs directly. As she put it, “the spending it will generate will create demand for workers”. But at what wage rate  – given the minimum wage does not look set to rise to $15 – and in what sectors? What if – as Every rhetorically observes – “the USD1,400 is spent on imported goods rather than something made in the US? And what if it is spent on stocks that end up dropping in price as a transfer of wealth to the deep pockets of a hedge fund owner who is shorting them? Does this get us back to “full employment”?”

No, of course, it doesn’t, but sure helps create a new generation of daytraders who have no other skills except for BTFD.

Yet while Biden is valiantly fighting to pass a $2,000 $1,400 stimulus check – amid rising warnings from the Larry Summerses of the world that this could overheat the US economy and spark an inflationary fire – the question is what will the new minimum wage be. Will it be $15… or will it remain unchanged?

Overnight, Goldman has published a note looking at the economic effects of a $15 minimum wage hike (which may prove to be completely unnecessary since the odds of such a wage increase look virtually nil), and yet at some point in the future it is quite likely that wages will increase so it is worth going through Goldman’s methodology.

Below we excerpts some observations from Goldman on what the bank thinks would happen, along with commentary:

Some more details: the federal minimum wage has remained at $7.25 per hour since 2009 and has declined substantially in real terms over the last 50 years, as shown in Exhibit 1. 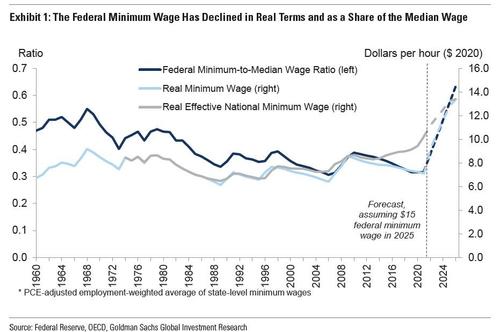 The ratio of the federal minimum wage to the median wage has fallen from roughly one-half to one-third, leaving the US minimum-to-median wage ratio at the bottom of the advanced economy range, as shown in Exhibit 2. 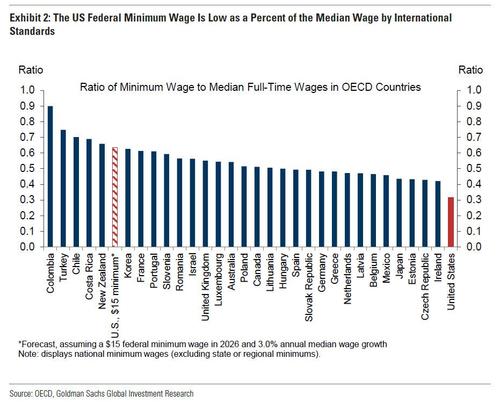 Indeed, if Bide’s proposed min wage increase is implemented, it would take the US minimum-to-median ratio close to the top end of the OECD range from the very bottom where it current sits.

While it goes without saying, the main benefit of a minimum wage hike is that it would raise income for low-wage workers, in some cases sharply. Quote Goldman:

We estimate that about 30% of workers would benefit from the direct or spillover effects of a $15 minimum, most of them adults with family incomes below $50,000. Many studies have found that higher minimum wages reduce poverty, and a Census study found that the wage gains for affected workers continue to grow in the years after minimum wage increases.

To be sure, other policy tools can also raise the earnings of low-wage workers, in particular the Earned Income Tax Credit (EITC), a refundable tax credit offered to workers with very low wages. As several economists have noted, the EITC and minimum wage can complement each other. The EITC in isolation should raise workers’ willingness to work at low wages because their pay is supplemented by the tax credit, allowing employers to capture some of the benefit of the policy. Combining the EITC with a higher minimum wage would shift more of the benefit to workers. 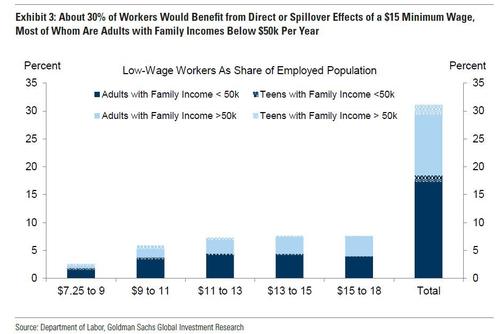 Of course, while Democrats will pound the table on the positive aspects of min wage hikes, comservatives will argue that the costs more than offset the benefits, and it goes without saying that the biggest cost of a minimum wage hike is reduced demand for low-wage labor. Cue Goldman, which on one hand disagrees and says that “on average, studies find only modestly negative effects of minimum wage hikes on employment of low-wage workers.” 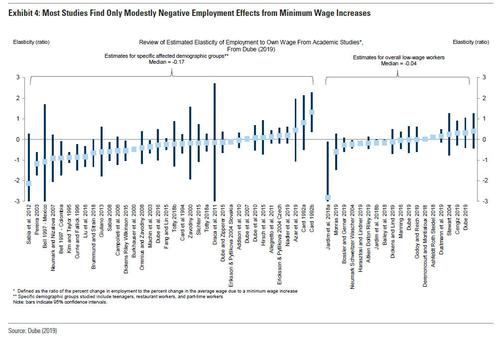 Yet on the other, the bank also concedes that “there are only a handful of studies of hikes as large as the $15 proposal because few hikes this large have occurred in the US or elsewhere. These studies find mixed results, but several have found disproportionately more negative employment effects than most studies of smaller hikes.” Some more details:

Studies that look specifically at the largest minimum wage hikes have reached mixed conclusions, but several have found more negative employment effects than most studies of smaller hikes, as shown in Exhibit 5. 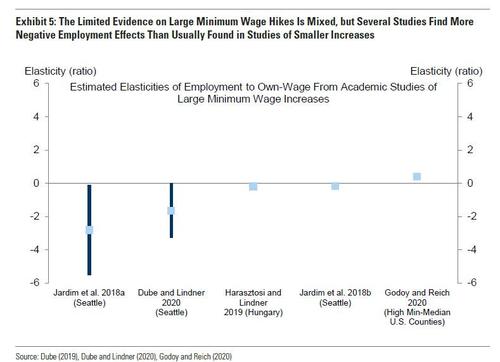 The most negative estimates come from studies of Seattle’s 2016 adoption of a $13 minimum wage, which resulted in a minimum-to-median wage ratio of roughly 57%. Researchers note that estimates from studies of the Seattle policy likely overstate the true negative employment effects because they lack an unbiased control group and cannot observe relocation of employment from Seattle to its lower minimum wage suburbs, but taken at face value they imply that Seattle’s minimum wage hike lowered employment for low-wage workers by substantially more than it increased wages.

This, the bank concedes, “leaves some uncertainty about the employment effects of a $15 federal minimum.“

It’s not just employment that is and will be cut: another cost of increasing the minimum wage is that employers will cut workers’ hours and non-wage benefits such as health insurance, even if employment does not decrease substantially. Similar to above, economists found that Seattle’s 2013 minimum wage increase substantially reduced hours. Yet despite the contrarian evidence, the CBO estimates that a $15 federal minimum wage would have little effect on benefits because few low-wage workers receive non-wage benefits and because employers face tax penalties if they offer benefits only to high-wage workers. Good luck with that.

Finally, what would the impact of a minimum wage hike be on the most important metric of all: inflation?

According to Goldman, raising the federal minimum wage “would also affect wage growth and inflation. The impact would grow in each subsequent year of implementation as staggered increases pull up the wages of a progressively larger group of workers in states where the local minimum is below the new federal minimum.” Here, the bank’s economists estimate that the total direct boost to wage growth over 2021–2026 would be roughly 3% per year.

The incremental effect of the $15 minimum on wage growth is not dramatic, even though it represents a more than doubling of the current federal minimum. The effect is limited in part because $15 would not take effect until 2026 and represents less in current dollars, and in part because many states already have closed or are planning to close much of the gap between the current federal minimum and $15.

In short, anyone betting that a $15 min wage hike would spark much higher inflation will be disappointed.

That said, even such an academic exercise is meaningless, because as Goldman concludes, “the odds of an increase to $15 are low.” First, a quick look at how Federal minimum wage hikes took place in the past:

Congress last passed a minimum wage hike in 2007. That increase and the two prior ones, in 1989 and 1996, occurred in similar circumstances. First, they occurred in mature business cycles, when the unemployment rate was relatively low and the last recession was 6 to 7 years in the past. Second, and perhaps more surprisingly, they all occurred under divided governments. The current environment is economically and politically different to any of those experiences, and we think Congress is fairly unlikely to pass a minimum wage increase this year.

That said, the Biden Administration and congressional Democrats have made increasing the minimum wage a priority this year, so it remains a possibility. They might consider three approaches to do this:

Ultimately, whether or not a minimum wage hike passes will depend on centrist Democrats. As Goldman concludes, the positions centrist Dems have taken on the issue provide some clues as to where the consensus could come out. Democratic Sen. Manchin (W. Va.) recently suggested that he could support an $11 minimum wage that would be indexed to inflation going forward. The “Blue Dog” Democrats in the House proposed in 2019 to pause the proposed minimum wage increase once it reached $9.85 to assess the economic effects.

To Goldman this suggests that while a $15 minimum wage is unlikely, lawmakers may be able to reach a compromise for a min wage in the $10-11 per hour range, with Goldman expecting that any increase would phase in no faster than around $1 per year..

All Hail The Conquering Central Bankers… Or Else